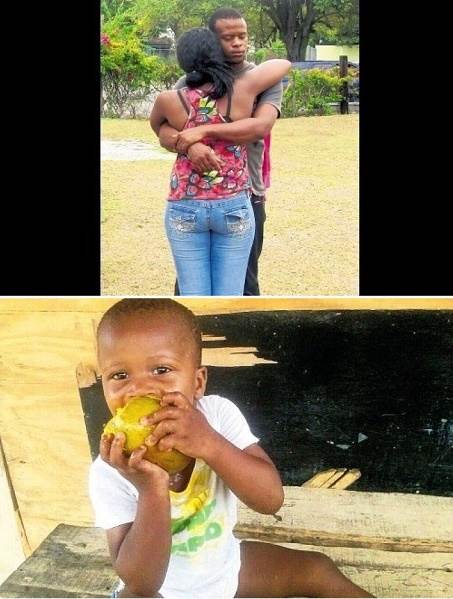 LEWIS, St Ann — The pain etched on their faces as tears rolled down their cheeks was enough to tell how the parents of two-year-old Jayheim Cooper felt.
With their only child killed on Thursday night, Calvin Cooper and Kerina Peart were too grief-stricken to speak when the Jamaica Observer caught up with them on Friday.
In fact, the mother of the young child had not been taken for medical attention.
The child’s grandmother also cried openly, not only reeling from the shock of losing her grandchild, but having witnessed the murder in her own yard, and being unable to do anything to help the child who brought laughter to the family.
Baby Jayheim was allegedly killed by a man whom people have said is mentally challenged, in a community located a few miles out of St Ann’s Bay. Reports are that the baby was in his yard playing when the man entered, grabbed him and slashed his throat. This happened shortly after the supposed same mentally-ill man allegedly attacked and cut the throat of Logan Simpson with a knife in another section of the community.
He then allegedly raced up to Cooper’s residence where he used the same knife to slash the throat of the child, who was pronounced dead at hospital.
According to family members of the baby, the man often frequents their home because his brother operated a shop nearby and so when he entered the residence on Thursday evening around 5:30, they thought it was just one of his regular visits to his brother.
They were shocked when he allegedly grabbed the youngster and slashed his throat in the garage owned by the child’s father.
The child’s grandmother reportedly heard an uproar in the community, but did not know what it was about.
“The baby was in the garage because that’s where he plays all the time. She (child’s grandmother) saw the person coming but it is somebody that we know,” Stacy-Ann Cooper, an aunt of the child, said. She said that the man slashed the child’s throat and ran.
He was later caught, tied and beaten by residents before being rescued by the police.
According to Cooper, the family had no previous altercations with the man. The badly-shaken aunt said that she has known the accused man for sometime, but not as a mentally-ill person. She however pointed out that certain occurrences in his life could have driven him to insanity.
“In the past he has gone through some stuff so I don’t know if that affected him,” she said.
The accused man, who worked on a ship, was fired some years ago and has since only been able to get “day’s work” in his community.
“We see him as not somebody who was of unsound mind. He did little jobs around the place with persons, work with them as a construction person,” she added.
“Everybody in the community loved that little boy. It was said that is only adult friend that he had. He was fun,” Cooper said.
When the Jamaica Observer visited Lewis on Friday, residents openly discussed the murder. Some expressed shock, while others were disappointed that the life of the man accused of the murder was spared.
A woman who gave her name only as Patricia said that she saw the first attack carried out and believed that if he was caught then, the child would not have been harmed.
She said that she saw the man with a long white knife in his hand approaching a shop in the community.
“He looked so aggressive coming down and he went in the shop in the square and is like him no see who he was looking for,” she said.
She said that Simpson was then approaching the area when he was attacked and his throat slashed. She said that she raised an alarm and he ran. That was when he went to the Cooper home and allegedly killed the child. The incident reportedly happened in the presence of a young child.
“We feel it for the baby,” the woman expressed.
She said she believes if the man was chased, he would not have had the chance to kill the baby.
Several residents have also raised questions about the man being labelled as mentally-ill. According to them, he has done nothing in the past to be so considered.
Simpson, who received several stitches, said that he put up a fight when he realised what was happening.
“I fight in the name of Jesus and see if I can really get through. Mi flash him off,” Simpson said.
Grateful to be alive, Simpson was taken to hospital where he was treated.
Police expect to charge the accused man soon and, according to Superintendent Dudley Scott in charge of St Ann, the police have gone into the community to offer grief counselling.