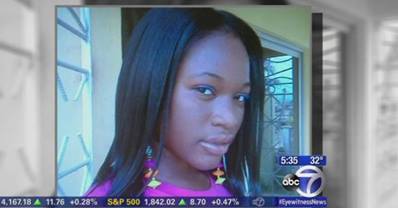 NEW YORK (WABC) — A teenager from Brooklyn was killed on vacation in Jamaica, and now her mother is talking about what happened and how she learned the news.

While visiting relatives in Jamaica, 19-year-old Franciena Johnson and her cousin were shot and killed just one day after she arrived.

Her heartbroken mother never imagined it might be the last time she would see her child when she sent her off for winter break to stay with her grandmother. But now Suzette Clarke-Grose, of Canarsie, is dealing with unimaginable pain.

After Franciena and 18-year-old cousin Nadia Fearon vanished, police found their bodies far from the resort areas, floating in a salt marsh near May Pen on the country’s south coast.

Then Franciena’s grandmother made the terrible phone call.

“She said, ‘Brace yourself, because your daughter is dead,'” Clarke-Grose said through tears. “I asked what happened, and she don’t know, she just never came home Friday night. She and Nadia left the house to go to May Pen, and she didn’t return home.”

Police tell the family they are putting together bits and pieces of evidence to help find the killer. Someone heard gunshots, which led them to the bodies.

“I was told it appears they kidnapped them in a car, and the area where they took them was very lonely,” Clarke-Grose said. “Nobody really knows what happened. They only know that they found them with gunshot wounds to the body.”

Clarke-Grose spoke to Eyewitness News while sorting through hundreds of pictures of her photogenic daughter, who was studying to be a nurse at Kingsboro College. She was born in Jamaica and moved to the US as a child, and her mother can’t understand why anyone would hurt her.

“She was a bubbly and loving girl, that’s all I can say,” Clarke-Grose said. “Very respectful. I can’t imagine somebody doing something, because it’s somebody you can’t do nothing but love.”