Leroy “Blast” Bill Black was much loved, as evidenced by the fact that he has two obituaries printed in today’s Press of Atlantic City.

It might have looked like a mistake on the obituary page this morning when two identical-looking (at first glance) listings appeared on top of one another, but the two different, but similar, obituaries were placed by his wife and girlfriend, respectively. 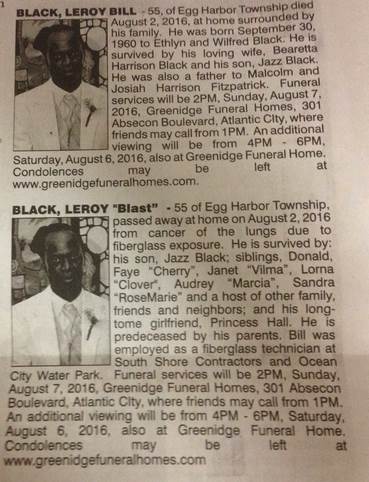 Black died at home Tuesday of lung cancer at the age of 55, the obituaries state. And depending which one you are reading, he was survived by his “loving wife Bearetta Harrison” Black, or his longtime girlfriend Princess Hall.

The competing obituaries were put in the newspaper separately because “the wife wanted it one way, and the girlfriend wanted it another way,” someone at the Greenidge Funeral Home told Philly Voice.

Where the first mentions the wife and son Jazz Black, along with two other children, the second mentions the girlfriend, Jazz Black and a host of siblings as his surviving family.

18 thoughts on “WIFE AND MATE PUT OBITUARY IN NEWS PAPER”