Brittany Carter, 23, is accused of forcibly performing an undisclosed s*x act on the driver in the early hours of the morning at Findlay, Ohio, near Toledo, on January 28.

Documents related to her case came to court last week. 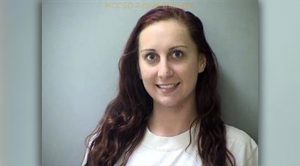 Corey Jackson, 20, who remains at large and is also wanted for murder, has been indicted for aggravated robbery over the incident.

The Smoking Gun reports Carter and Jackson stand accused of raping the man, and then fleeing with $32 they stole from him.

A third man travelling in the cab will be charged once identified, police say.

Brittany Carter, 23, has been accused of calling for the cab and then raping the driver, while two other men were present.
Police said Carter, along with two dark skinned men, called for a taxi at about 4.25am. The attack occurred during the subsequent trip.

The 29-year-old victim from the Trinity Express Cab Service, who has not been named, was unhurt in the incident.