WOMAN’S 140LB TUMOR KEEPS HER IN THE HOUSE (TRINI) 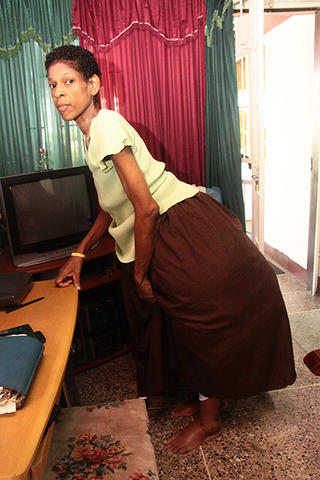 Gloria Nicome, who was diagnosed with plexiform neurofibroma, at her home yesterday. PHOTO: NICOLE DRAYTON
Adorning the wall of Gloria Nicome’s home is a plaque that reads “tough times don’t last but tough people do.”

In the last six years, Nicome has been trying to put on a brave face but few people know her troubles.

Under Nicome’s baggy clothes is a 140-pound growth on her buttocks, hips and legs which she has been battling with daily.

Nicome weighs 250 pounds of which 110 pounds is her body weight.

The growth, which is spreading by leaps and bounds, has Nicome, a mother of one, living like a prisoner at her apartment at Sandalwood Crescent, Malabar, as it oozes blood, inflammation and give off an offensive odour.

Nicome, who collects a monthly $1,150 in public assistance and a food card, lives alone. Due to her medical condition she is unable to sit, stand, walk or sleep for long periods due to intense pain.

Except for a 32-year-old son, Nicome has no support base.

“If I didn’t know God my life would have been a living hell… a nightmare. He is giving me the strength to fight this… to deal with this,” said Nicome, a born again Christian.

“You see that sign on the wall, I am a living example of that. I have gone through tough times and I have survived. I consider myself a tough person. I know one day I will rise above this. God must be testing my faith,” an emotional Nicome said, burying her face in her hands.

Up to 2009, Nicome, who worked as a supervisor in a meat shop, had lived a healthy and normal life, having weighed a healthy 160 pounds.

“I just slipped and fell on my buttocks one day while walking in August 2010. I didn’t think much of it. I didn’t even feel no pain when I got up,” she said.

By the following month, Nicome said she her bottom started to swell and pain. She visited the Eric Williams Medical Science Complex, Mt Hope, where she was diagnosed with plexiform neurofibroma.

“In November 2011,” Nicome said, “doctors at Mt Hope Hospital teamed up with doctors at the Port-of-Spain General Hospital to perform surgery to have the growth on my behind removed.”

However, during the operation, Nicome said she started to bleed internally and the doctors had to hastily stitch her back up. It was only after Nicome recovered, she realised that half of the insertion the doctors had made on her buttocks was left opened.

Now five years later, Nicome’s growth, which is black in colour, has not stopped spreading. She has also noticed that the section of the cut that had been healed was now re-opening, while her legs have been retaining water and ballooning.

“I think the hospital is taking too long to do something. I am suffering far too much. I just want medical care,” Nicome pleaded.

Nicome thanked her D’Abadie/O’Meara MP Ancil Antoine for providing her with a caregiver who prepares her meals everyday. (SH)

Plexiform neurofibroma is a benign tumour of peripheral nerves arising from a proliferation of all neural elements, pathognomonic of neurofibromatosis type 1 (NF1). It involves single or multiple nerve fascicles that arises from major nerve branches.