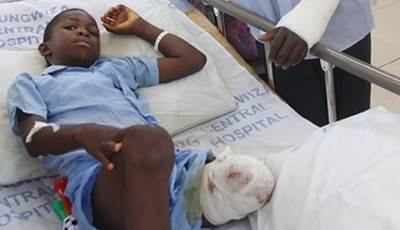 A Mutoko father dived into a river and fought a crocodile with his bare hands to save the life of his 11-year-old son who had been seized while crossing Nyaitengwa River.

Mr Tafadzwa Kachere and his son, Tapiwa (11) were both seriously injured in the battle and were yesterday admitted at Chitungwiza Central Hospital.

Tapiwa’s left leg had to be amputated, while his father’s left hand is badly hurt. Mr Kachere, who stays in Katiyo 1 Village under Chief Nyajina, said the crocodile attacked while they were on their way home from his garden.

“When we were coming from the garden, I was walking in front and the boy was following me. After crossing the river, I heard the boy screaming for help and I rushed to rescue him. I could see him struggling to free himself as the crocodile kept on holding on to his leg.

“I took the risk and dived into the water and joined the fight trying to force open the jaws with my hands. I failed to open the crocodile’s mouth and resorted to poking its mouth with reeds while seated on its back. I instructed my son to hold on to the reeds as I continued poking into the crocodile’s mouth until it released the boy,” said Mr Kachere.

But when the reptile freed Tapiwa, it turned on the father.

“I struggled with it until we both got out of the water and I was still on top of it. I poked its eyes several times until it released my injured hand,” he said.

After the attack, the two were taken to Nyadire Hospital for emergency first aid before being moved to Chitungwiza Central Hospital.
Said the hospital’s chief executive Dr Obadiah Moyo: “That is really a sad story and we are doing our best to help the two.

“We are monitoring the situation and we hope they will soon be okay.”
Mr Kachere appealed for assistance to buy an artificial limb for his son.
“I appeal to well-wishers for assistance in the purchase of an artificial leg for my son. He still wants to go to school and up to now he still thinks he will get his leg back.

“We lied to him that the leg was temporarily being removed for treatment purposes and I do not know how to break the news to him.”