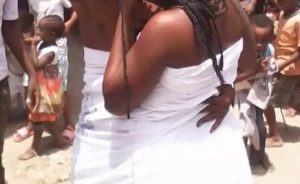 Residents of Tharaka in Meru Country were treated to free drama when a matatu driver and a woman said to be someone’s wife were found stuck to each other in the morning after a night of s3x.

The two spent the night in the matatu, which is owned by the driver, exchanging fluids only to be found in the morning with their privates stuck together in the matatu that was parked by the road-side.

Residents gathered to witness the rare spectacle as the two tried to separate each other in vain.

The husband to the woman who was caught having s*x with the matatu driver arrived at the scene and demanded to be paid before he could separate them.

The matatu driver begged the man for forgiveness and offered to pay him Ksh 10,000 for committing adultery with his wife.

The man then mumbled some incoherent phrases and the two disengaged with their g3n!t@ls appearing swollen.

They were then taken to Chiakariga Police Station.

Residents claimed the two were ‘locked’ to each other through witchcraft and only the woman’s husband could separate them.