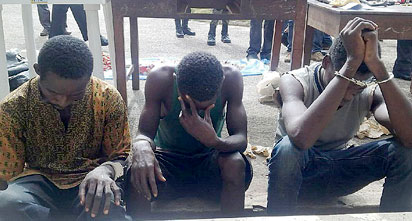 Owing to the myths attached to cemetery, several people dread going there. But, a playwright said, “Many birds dread water, but the duck sleeps in it”.
suspects-allegedly-selling-For five suspects, including a 25 year-old pregnant woman, Saki Adediran, paraded by the Oyo State Commissioner of Police, Mr. Muhammed Katsina, they relished in punishing the dead. They dug deep into graves and brought buried bodies to a slaughter slab where they used knives to decimate them into parts and sell to prospective buyers who, in turn, used the parts for money-making rituals.
They must have been committing this heinous crime for some time and, since they had murdered sleep, the ghosts of those they had troubled did not allow them to rest until they were caught. The suspects arrested in connection with the alleged crime were Abati Kolade, Tayo Akinrinola, Ramon Korede, Mojeed Adediran and Saki Adediran.
While narrating how they were caught, CP Katsina said, “Following a petition referred to the State Intelligence Bureau by the Commissioner of Police, the operatives of the bureau began a discreet investigation into the criminal activities taking place at Muslim cemetery located around Lifefort International School, Apete, Ibadan where graves, numbering about six, had been excavated by unknown perpetrators. Through a painstaking, coordinated investigation and a clue left behind by the perpetrators, the operatives arrested five suspects who confessed to the alleged crime. Among the suspects arrested is a female who confessed to the crime and disclosed that she usually bought human skull at the rate of ¦ 4,000”.
The woman human parts dealer suspect, Saki Adediran, spoke to Sunday Vanguard, saying, “Korede, one of the suspects, always buys charms from me. One day, he told me he had ‘biscuit’ or menumo (human head). I bought it and gave him N4,000. We have been doing it for quite sometime”.
When asked to disclose the identity of the person she sold the human skull she bought for N4,000 to, she refused to talk.
One of the other suspects, Akinrinola, who did not show remorse, was reluctant to talk until the officer who investigated his case showed up. The suspect said, “One man took two of us to the cemetery around 9pm. When we got there, we started exhuming the bodies that still had the gall intact. But, we checked all of those we exhumed, we did not get any gall.” Other questions put to him were not answered.
Paraded with the suspected human parts dealers were members of a gang of armed robbers who allegedly specialized in snatching posh cars. The CP hinted that the command, working on a “robust intelligence”, detailed the state Special Anti Robbery Squad (SARS to conduct diligent investigation leading to the recovery of assorted cars either snatched from the owners at gun point or stolen from where they were parked. The posh cars were recovered from different locations including Lagos, Ogun, Oyo, Kwara and Kano states. The vehicles included one unregistered black Toyota Corolla car,one Honda Accord saloon car, one wine Ford car with Reg.No. KSF 342 CY, two Honda Accord cars, with Reg. No. EPE 814 CD and ABJ 777 AY.
About 24 vehicles, 63 motorcycles, NITEL cables, among others, were allegedly recovered.
The command also recovered about 3,000 rounds of live ammunition. The ammunition was recovered around Idi-Iroko community, Soka area of Ibadan when a team of detectives was dispatched to the area.
“The hoodlums, on noticing the presence of the policemen in the area, jumped off their motorcycle and fled into the bush. When the area was thoroughly searched, 1,000 rounds of 7.6mm live ammunition were recovered along side the motorcycle with reg.No. LAGOS QJ 201 AKD,”Katsina said.
The police also arrested alleged cross-border robber, Opuoro John, for snatching exotic vehicles at gunpoint.
“The cross-border robbery suspect, accompanied by other suspected members of the gang now at large, attempted to transport a stolen vehicle to Benin Republic where a notorious receiver, simply identified as Alhaji Sokoto, was waiting to receive it. Opuoro John ‘m’, who was said to have attempted to bribe the police, was arrested. Investigation revealed that the vehicle was snatched at gun-point in Delta State. Efforts have been put in place to apprehend the fleeing robbery suspects and their accomplices”, the police boss said. Saying he actually intended to take the vehicle to the neighbouring African country, the suspect, Opuoro, said, “One Alhaji Sokoto called me that I should bring this black car to him as he had concluded arrangements with the Customs where he bought it from. When I was going on the way, it was dark and I decided to park by the road side very close to a police check point with the intention that I would continue my journey the following morning. As I opened the car, some policemen came to me and demanded the particulars of the car which I could not produce”.
In another development, operatives of SARS left no stone unturned in a case of armed robbery transferred to the squad from Divisional Police Headquarters, Iseyin. SARS recorded a breakthrough as it recovered 14 motorcycles suspected to have been stolen.
Other items recovered from the suspects include one triple barrel locally made short gun, one live cartridge and two expended cartridges.
One Ibrahim Ajibola, a.k.a Scorpion ‘m’, and one Johnson Bolaji ‘m’ were arrested in connection with the case.
An alleged serial rapist, Isah Buruku, a Fulani, who the police said had been on their wanted list for armed robbery, demonstrated how he drugged his victims before raping them repeatedly. The police said he would disguise as a commercial driver and, after picking his victims who are mostly women, would drive them to an isolated area where he would mix all types of drugs together to make the victims fall asleep. He demonstrated how he mixed the drugs with drinks.