I bought my wife clothes, but she will never wear them’
October 15, 2016 Metro

A mother of six, Titilayo Abdul-Hammed, has lost her 17-year-old marriage for making her husband a laughing stock in the neighbourhood.

An Igando Customary Court in Lagos State granted the request of her estranged husband, Minkail Abdul-Hammed.

According to the News Agency of Nigeria (NAN), Abdul-Hammed, 57, had approached the court seeking to end his 17-year-old marriage with Titilayo, because her nakedness was seen by spectators free of charge. 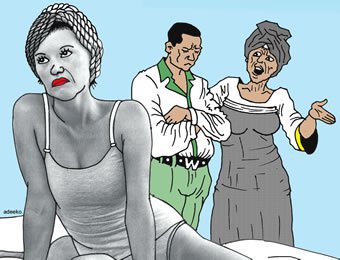 The Court President, Mr Adegboyega Omilola, in his judgement said that it was obvious from available evidence and the respondent’s refusal to appear in court that the marriage had “hit the rock”.

“Throughout the duration of this case, the respondent refused to honour court processes.Therefore, the court has no other choice than to dissolve the marriage.

“Both parties are no longer husband and wife; they are free to marry any partner of their choice without any hindrances and molestation,” he said.

Abdul-Hammed had said that his wife was always disgracing him in public as she was fond of tying only wrapper to watch television in the neighbourhood.

“I bought my wife clothes, but she will never wear them; she prefers to tie wrapper on her chest.

“There was a day I came home from the mosque and was looking for my wife because she did not come for the Jumat prayer.

“I was told she was in the third house, so I went there and met her in front of the TV with residents of that house despite the fact that I bought T.V in all our rooms.

“I querried her for preferring TV to mosque and ordered her to follow me home.

“She refused and as I was trying to push her from the room, her wrapper dropped, and behold my wife was neither wearing a pant nor a brassier.

“The residents in the room saw my wife’s nakedness live and direct and were making jest of us. I was embarrassed and ashamed.

“The petitioner also accused his wife who was absent from court of being fetish.

“Of recent, I noticed that my wife always lock her room and keep the key to herself whenever she wants to take her bath or do anything within the premises.

“One day, she went to buy something and locked her room as usual. I searched for the duplicate key because I was curious and opened the door.

“I sighted a paper in which a long incantation was written on it and my name was mentioned.

“I was to search her closet when I heard her footsteps coming, I quickly locked the room, I took the paper to show her family members,” he said.

Abdu-Hammed also described his wife as being wasteful with food as she was in the habit of cooking far in excess of what they could eat.

“I have always told her to measure food before cooking and that she can always give out the remnant to the poor, but she prefers throwing them away.

“She has stopped cooking for me since 2012 and told me to be doing the cooking which I am still doing,” he said.