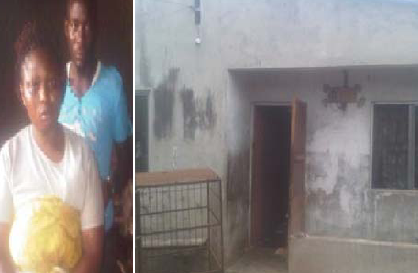 A two-year-old child narrowly escaped being burnt to death, Tuesday, after his parents’ apartment in Ijegun area of Lagos was allegedly set ablaze by their landlady, in a bid to forcefully eject them. Mr. & Mrs. Shakiru, owners of the burnt appartment However, the couple’s property were destroyed in the fire. The incident, which occurred at street, Ijegun, sent residents scampering, as they managed to prevent the fire from spreading to other apartments. Vanguard gathered that trouble started for the couple, Mr. and Mrs. Adeleke Shakiru after their landlord, Mr. Jamiu Azeez ordered him to stop using his power generating set, popularly known as ‘I better pass my neighbor.’ But the couple reportedly ignored the order. When Vanguard arrived the building, yesterday, Shakiru was sighted explaining what transpired to some curious sympathisers, who thronged the scene. He said: “I rented this room and parlour apartment two years ago and have been using my small power generating set like every other other tenant. The generating set is kept outside the building. When my landlord asked me to stop using it, I asked why, because I was not the only one using gen set in the building. His wife interrupted and asked what audacity I had to challenge her husband’s authority. That was the genesis of the problem between us and the landlady. “At a point, she pulled off our doors and windows without any cause. The matter was reported at Isheri division, but was later withdrawn after some persons in the area intervened. “The unexpected happened on Tuesday. I was at work, when my wife called at about 9a.m., to inform me that the landlady had set our apartment ablaze. I quickly rushed home, only to discover that all our property were destroyed in the fire.” His wife took over from him at this point, explaining that she was outside when a neighbour raised the alarm that their landlady had allegedly set the house ablaze. She said: “A neighbour, who saw her, said she sprayed petrol through our window and immediately struck a match. Before then, she was seen dragging one of my children to the well, threatening to throw him inside. But the move was prevented by a neigbour, who released my son from her grips. “While the apartment was on fire, one of my neigbours rescued my two-year-old son, who was inside,” she said. However, this reporter could not reach either the landlord or his wife as they were said to have taken to their heels immediately the apartment went up in flames. Meanwhile, policemen at Isheri Osun, have reportedly been informed of the incident. Some of them, who visited the scene, were said to have taken shots of the building before leaving. FEMI AJASA View all posts by Femi Ajasa → PREVIOUS POST We have confidence in you, Olu of Warri tells Semenitari NEXT POST P-Harcourt refinery producing 5m litres daily; NNPC deploys 200 trucks You might also like P Vanguard Awards: Cossy, Rita Dominic, others rock Red Carpet Peter Obi is only pretending to be in PDP — Oye, APGA national chairman Why I don’t wear bras – Rising Ghanaian actress What women find attractive in men Oshiomhole, Messiah of Edo —Ediaken N’Uselu Police discover three decomposing corpses, human skull in Enugu My wife carelessly killed my children, Should I forgive her? Recommended by Disclaimer Comments expressed here do not reflect the opinions of vanguard newspapers or any employee thereof. 0 comments Sign in0 people listening