PNP SUPPORTERS A ROW OVER PARLIAMENT

ANGRY supporters of the Opposition People’s National Party (PNP) yesterday fumed over a decision by the police to keep them further away from Gordon House to witness the usual pomp and pageantry associated with the ceremonial opening of Parliament.

After much complaint, the mostly orange-clad supporters who were assembled at the southern end of Duke Street, were given permission by two senior PNP officials to move closer to the happenings.

Supporters of both the PNP and the ruling Jamaica Labour Party (JLP) were forced to gather some distance from the building based on a decision by the police to enforce the 200-yard rule under the Public Order Act.

But while the JLP supporters — decked in green assembled at the northern end of the long stretch — were largely quiet, the PNP supporters complained that they could not see what was happening as they were too far away. 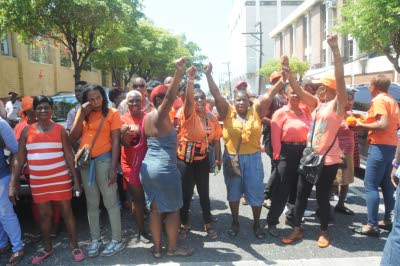 “Wi deh too far, wi cyaan si nutten from yah suh,” was the recurring complaint from the supporters.
They lodged their complaints with PNP officials, including members of Parliament (MPs) Denise Daley (St Catherine Eastern) and Phillip Paulwell (Kingston East and Port Royal), who all agreed that they were too far away.

Paulwell, however, advised the supporters that he would ask the leader of Government Business and the police to review the decision and begged his supporters to abide with the decision.

Soon after, Opposition Senator KD Knight instructed the supporters to move outside of the sun and closer to the building, after which Paulwell beckoned to them to move closer to their usual gathering spot where they stayed for the rest of the proceedings.

The decision by the police to enforce the Public Order Act seemed to have been triggered by last month’s swearing-in of MPs, which saw supporters hurling insults at JLP ministers, attacked a dog dressed in JLP garb, and broke down a barricade.

Yesterday, the insults continued but in a more subdued tone. The target of most of the insults were Prime Minister Andrew Holness, his wife Juliet, and first-time members of Parliament Juliet Cuthbert and Alando Terrelonge.

The JLP supporters meanwhile, who were in a festive mood as they drank mixed liquor and danced to music blaring from a parked truck, said they were comforable where they were gathered as they were able to see the happennings.

“Wi alright. Anywhere dem put wi a deh wi a go,” said one woman who identified herself as Sonia.

Another woman said: “Yes, wi alright with the distance because even if dem put wi a Jericho, wi a still labourite.”

However, the JLP supporters later moved from where they were gathered and assembled at their usual spot when the prime minister arrived to cheer him on and greet him. Some even got close to the JLP MPs, with one overly excited woman using her face rag to clean their shoes.

2 thoughts on “PNP SUPPORTERS A ROW OVER PARLIAMENT”