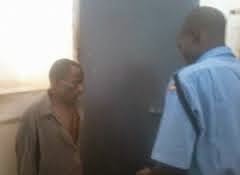 – A man who has been on the run for the past one week after he sodomized a 25-year-old herder before killing him was arrested yesterday in South Lake Nyanza.
The 45-year-old suspect was arrested at Suswa Trading Centre and is currently locked up at Kongoni Police Station.
A senior police officer who spoke to the media on condition of anonymity because he is not authorised to do so said that the man attacked the herder and sodomised him before killing him with an arrow. He confirmed the arrest saying that the suspect will be charged with murder.
He added that the suspect was arrested in Suswa by police who were acting on a tip off from members of the public. Coincidentally, the suspect’s 20-year-old son is serving a 15 year jail term at Naivasha G.K Prison for robbery and it seems crime runs in the family.

0 thoughts on “WTF AFRICA- MAN SODOMIES NEIGHBOR BEFORE KILLING HIM”