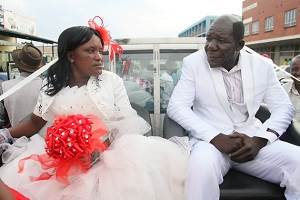 BUSINESS came to a standstill in the city centre in Harare on Friday when reigning “Mr Ugly” William Masvinu and his wife Alice Chabhanga were paraded in the streets in a mock wedding.

The entourage started off at Holly’s Hotel travelling in a convoy and passing through City Sports Bar before heading to Fourth Street bus terminus.

People stampeded to catch a glimpse of the self confessed king of ugliness.

Many people could be seen using their mobile phones to take pictures of the proceedings. Dressed by Lifel Investments, the bride and groom looked immaculate.

The “wedding party” took place in the evening at City Sports Bar until the wee hours of Saturday.

“The couple danced, kissed and cut the cake. The best man at the wedding was Mr Ugly first runner up Benny Chakanyuka.

The party doubled as a celebration of Masvinu’s triumph at the recent Mr Ugly national contest where he retained the title.

Masvinu got his prizes on the wedding night. Besides the $1 500 from the organisers, local company, Lifel Investments gave away packages that not only benefited Masvinu, but his families as well.

Among the prizes handed to him were overalls, safety shoes and rain coats. The company also added $200 to Masvinu’s grand prize, $100 to the first runner up, Chakanyuka as well as $50 and groceries to the second runner up Funny Musekiwa.

Masvinu also won a year’s school fees for one child while the second runner up would get a term’s schools fees for his child.

Lifel representative Edgar Chakanyudze, said his company was supportive on the initiative.

“We believe that ‘beauty’ comes in different forms. In support of its cause, we have decided to give each participant a complete work suit, safety shoes and rain coats,” he said.

The show’s national co-ordinator, David Machona, said improvements were being made to ensure that Mr Ugly winners were adequately rewarded.