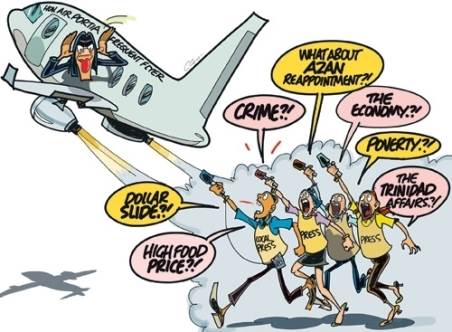 NEWS of Prime Minister Portia Simpson Miller’s latest overseas trip has sparked a debate among Jamaica Observer online readers. Simpson Miller left the island Sunday to participate in bilateral meetings and activities at the Eighth Annual European Development Days (EDD), organised by the European Commission in Brussels, Belgium. However, some Observer readers have questioned what benefits the trip will bring. Here are some edited comments:

Portia and she bestie just a travel out wi tax money sah. And we nah hear nothing about the ‘talks’ whenever they come back. See what Jamaicans really invested in? Where are the dividends? Oh well, another bad investment by Jamaicans!

Upon her return the country will continue to have no information on the nature of her visit; make’s no sense.

Jamaica falling apart and the nation is gripped by murders never seen before and all the PM does is travel extensively overseas with her huge delegation at the expense of taxpayers. If after two years as PM her stewardship cannot provide hope and a vision for the people, then it is time for her to step aside.

At this time we would like to welcome aboard all members of the People who Never Pay vacation club. We ask all advisors, security staff, speech writers, cabinet members, ministers without portfolio, assorted family members, coat holders, briefcase carriers, yes men and yes women to bring their seats into the locked and upright position and to fasten their seat belts. Enjoy the ride… until the next election, because at the end of the day, this is what it’s all about, isn’t it?

@L G (1): Tun-e-up, tun-e-up! In life, fairness should mean that people get what they deserve. Are you saying that the Jamaican people are not deserving of what has been happening to them? Because if you are, only a handful of trouble-makers is talking out while the vast majority remain quiet and many are very supportive of the govt, PM and their actions. Log on and Don’t stop the Progress!

She travel more than Obama! Lol.

This prime minister should be an international ambassador instead. She spends more time off than in the island. Maybe the problems are too much for her.

I’m sure these trips by the PM overseas are to gather up support for investment in Jamaica. However, the PM does a poor job at communicating to the masses the outcome of these trips. Is it arrogance or she simply lacks communicating skills? It would be helpful in she keeps the populace abreast and not having people guessing and speculating. We want transparency, when we hear these abrupt news of done deals without details, that’s the hallmark for doubts and corruption. And we know corruption has a big negative effect on the development of the country.

All this travelling is to avoid her people because the pressure at home is too much to bear and they want answers. True leaders address their people’s concerns in good and bad times. Is this someone who says she loves the poor? I hope the poor remember how much she loves them when she becomes suddenly available at election time. Accept

no more hugs and baby kisses, because you will suffer later on. Let her retire. I’ve seen far younger citizens with much more capabilities retiring. Time for your rocking chair, Mama P. This is not a monarchy.

And, of course, Jamaica will gain NO benefit from this and her other numerous trips to come. God help us! By the time Portia is finished travelling our debt will reach two trillion.

Keeping on working, working, working, Madam PM! People need to understand that having the PM on a business delegation raises the profile and make achieving the objectives more likely. That’s how business works. Sure she could have stayed home, but why not give Jamaica the best shot at success over there?

Sometimes the less one says is better. She does not have to report everything to the public. Obama has people going everywhere so he can reduce his travels. If the PM sends someone else, that’s another problem for my people. This is why she is the PM, leave her to do her job. Next time you may want to run for office to show the people how to administer.

‘High-level speaker’? She’s willing to speak in a place as far as Europe, yet she won’t speak in her own backyard, Jamaica.