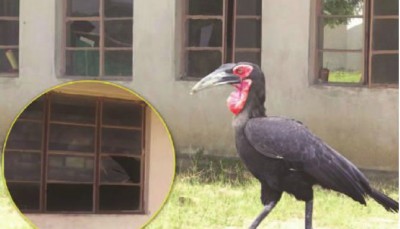 TO many children, the phrase “angry birds” only refers to a video game. To Zhombili Primary School pupils, “angry birds” refers to birds that are in the habit of breaking classroom windows with their long, thick and downward-curving bills. The school in Insiza District, Matabeleland South Province, was closed for a week after southern ground hornbills (insingizi) destroyed classroom and teacher’s cottage windows.
Zhombili Primary School, situated at the border of Matabeleland South and Midlands provinces, had to be closed at the request of parents who complained that their children were now afraid to go to school. Pupils started going to school on Monday last week.
School Development Committee chairperson Mr Douglas Sibanda told the Sunday News that the birds were making life for the entire community miserable. He said the birds had unsettled teachers but vowed that they were going to “deal with the birds with everything in our hands”.
“The big problem we face is that these birds are destroying windows and we are appealing to people who have an idea of how we can deal with them to come forward and assist us. Parents have mooted an idea of having parents on guard during weekends, as that is when these birds come down to the school,” said Mr Sibanda.
A teacher, who spoke on condition of anonymity, said the birds were a “menace to the school and the community at large”.
“We thank you for coming to hear our plight. Insingizi are a menace to the school and the community at large. They are destroying both classroom and teacher’s cottage windows,” said the teacher.
“Looking at how big the birds are, early childhood and Grade One to Two pupils were afraid to come to school and parents requested to have the school closed for a while so that they can try to chase them away. The school is not manageable because these birds are now daily phenomenon.
“We cannot afford to hire a caretaker because the school does not have the money to pay. Parents are not paying school fees and the little money we get from donors is not even enough to take us for the whole term. The school cannot also afford to be repairing windows all the time because that means it has to neglect other important issues.”
Our news crew which visited the school on Thursday afternoon saw some pieces of glass around the school.
The same teacher, who spoke on condition of anonymity, said the birds usually come and destroy the windows when there is no one at school. Most windows of the three classroom blocks were broken and only a handful had been repaired.
A villager, who resides near the school, Mr Mbuso Mahlangu said insingizi were common in the area. He disputed the belief that the birds might be sending a message to the community.
“We don’t know why insingizi are destroying windows. I do not want to think that this might be something unusual because if that is the case, the community will take action. As it stands, the community just took it as a passing phase which needs to be addressed accordingly so that pupils can go to school without fear,” said Mr Mahlangu.
The southern ground-hornbill (Bucorvus leadbeateri) is the largest hornbill in the world and features a striking red facial and throat skin that contrasts with its black plumage. This species is named for its habit of walking on the ground as it feeds, and it is less often seen in flight.

0 thoughts on “WTF AFRICA- SCHOOL CLOSES BECAUSE OF ANGRY BIRDS”