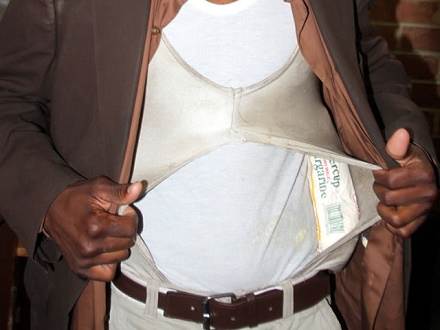 A 22-YEAR-OLD marobane – a popular name for shoplifters – from Pumula South suburb in Bulawayo, ran out of luck on Thursday when he was caught red handed with grocery items stuffed inside his jacket at TM supermarket at Ascot Shopping Centre.

Edison Mhiri was apprehended by TM staff after he tried to sneak out of the shop unnoticed.

Darlington Pewula, a supervisor at the shop, said Mhiri was a regular “customer” who always wore a suit when he visited the shop.

“He would come to the shop and buy a few items. We became suspicious because he would buy some odd items in the shop like a broom or an exercise book,” he said.

Pewula said he first noticed that something was amiss as Mhiri looked as if he had gained weight while he was in the shop.

“He pretended to answer a phone call. When he raised his hand to put his cell phone to his ear I noticed that something was bulging out of his jacket. I confronted him and asked what was on his waist; he took some money from his pocket and offered it to me as a bribe. When I refused he tried to run away but I was able to pin him to the ground,” he said.

Chronicle spoke to Mhiri who revealed that he had been in the “industry” since January.

“I have been in this business for a long time. I have stolen in many supermarkets in the city centre. I trade within the CBD and I have stolen on so many occasions that I have lost count.”

“I am able to raise more than $300 on average a month. I take care of my two cousins who are in crèche. I pay for their school fees which is about $60 a month. I am also able to provide food for us,” he said.

Mhiri demonstrated to the news crew and some TM employees how he would stuff his loot inside a spandex swimming costume that he modified into a vest.

He took off his jacket and shirt and showed his astounded audience the vest which he said can expand to accommodate groceries weighing approximately 10kg. He removed the stolen goods which included 4kg of margarine, 10 Axe body sprays and 4kg of pork valued at a total of $70 from the vest.