WTF AFRICA- WIFE SEH SHE NUH GET NONE 3 YEARS NOW

A 15-year-old marriage between a 45-year-old woman, Okome and her husband, Ese Obasa, hit the rock on grounds of the husband’s infidelity.

According to the News Agency of Nigeria (NAN), the court noted that the estranged couple was tired of the relationship and that all efforts to reconcile them had failed.

“Since both parties consented to the dissolution of their marriage, this court has no choice but to dissolve it.

“The court hereby pronounces the marriage between Okome Obasa and Ese Obasa dissolved today; both parties henceforth cease to be husband and wife.

“They are free to go their separate ways without any hindrance or molestation,” he ruled.

The petitioner, Okome, a sales manager, had approached the court, seeking the dissolution of her 15-year-old marriage over her husband’s infidelity.

She accused him of dating their church’s women leader.

She said:”My husband is dating our church’s women leader and he always brings her home for the night.

“Because of her, he chased me out of his house in 2013 and the woman packed in that very day.

“The woman is still living with him and my children up till now.”

The mother of three also accused her estranged husband of battering her all the time.

“He stopped me from working and locked me in and would not allow me to go out, he beats me anytime he sees me outside or a visitor comes to visit me.”

Okome said her husband had starved her of sex for three years as he barred her from entering his room. 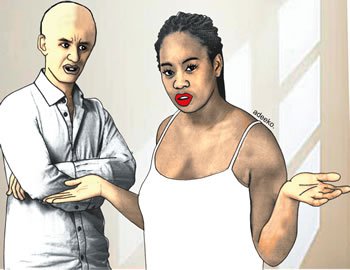 She pleaded with the court to end the marriage, saying, “I am no longer interested.”

However, Ese, 59, denied all the allegations, saying she did not lose any pregnancy.

“My wife did not lose any pregnancy; she always gives birth to her baby anytime she is pregnant.”

Ese said his wife had been flouting his orders and that he could not take it any longer as the head of the family.

“My wife always disobeys my orders, she is disrespectful, she goes out at will and comes in at will.

“I did not chase my wife out of the house; she left on her own when she could no longer cope.”

He urged the court to grant his wife’s request divorce, saying, “I am no longer interested in the union.”