WTF AFRICa-WITCHES POINTED OUT IN COMMUNITY 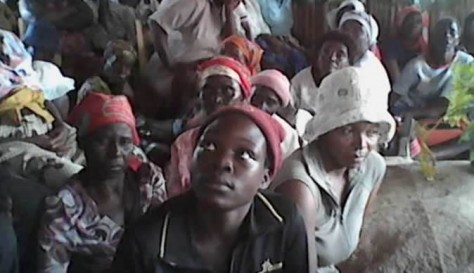 THERE is an old adage that says: “Suspicion is a heavy armour and with its weight it impedes more than it protects.” This explains the heavy weight recently lifted off the villagers in Mambondiani in Zimunya where and when the truth finally came out at acting Chief Zimunya’s court about alleged witches that had plagued the area.
From the 12 implicated witches, 10 were exposed following consultations at a local traditional healer.
The implicated witches were first hauled before acting Chief Zimunya’s court on September 28, 2014 following spine-chilling confessions to witchcraft by a 15-year-old Mutare girl, Yvonne (full name withheld).
The teenage witch stunned the court as she narrated her witchcraft adventures and implicated 12 other cohorts in the nocturnal game, all from Mambondiani Village.
Most of them were women and men who are frail looking to show their old age, while some of them seemed to be in their early 30s. There was, however, among them a 15-year-old boy (name withheld), identified as the grave opener.
The implicated 12 had all initially denied the allegations levelled against them.
To clear their names, acting Chief Zimunya had instructed them to consult a local traditional healer on October 22.
Only two were vindicated, whilst 10 others, including Yvonne, were made out to be witches that practised cannibalism.
Yvonne had confidently confessed to being a witch since the age of 10 when she claimed to have been initiated by her maternal grandmother.
She, however, said she no longer wanted to be a witch and had on many occasions refused to go out hunting at night, but her cohorts would force her, threatening to kill the people she worked for as a housemaid.
In her confession Yvonne narrated chilling events of possessing hyenas and flying in winnowing baskets to faraway lands hunting fresh corpses that would have just been buried.
The teenager said one of the old witches in her group had 15 hyenas, which she kept as induction tools for new recruits, while others kept tokoloshis. But all of them feasted on human flesh but sometimes were forced to kill people when meat was hard to come by.
Eight of the exposed witches including a 15-year-old boy held that they did not know about their disclosed night-time witchcraft activities.
They said they would often wonder why they experienced weird dreams that felt real.
Only Yvonne and one female witch knew of their witchcraft acts, but said they had been unwillingly initiated at a young age.
The sacked witches all asked for acting Chief Zimunya to help them get cleansed and have the inserted witchcraft incision marks (nyora) removed.
Acting Chief Zimunya said he would assist them but needed time to find out which traditional healer was best for the cleansing job.
He said communication through his messengers would come in due course when he found the best traditional healer for the job.
In his verdict, acting Chief Zimunya said all the 10 implicated witches never killed anyone so they were not fined anything.
He, however, said there was one more implicated witch (name withheld) still at large.
Acting Chief Zimunya said the alleged witch at large was the most dangerous of them all but had evaded the court orders since day one.
The alleged witch at large is believed to have cast a spell which led to the death of sekuru (Grandfather) Mukodza’s son in Mambondiani village, last year.