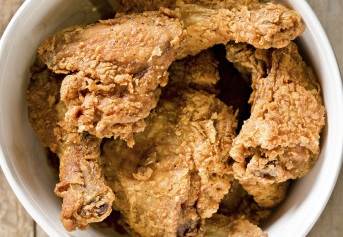 24-year-old Thandeka Lamani, from South Africa, burst into tears as she confessed to her father about his special chicken.

For seven years Thandeka’s father, Sivuruvuru, thought his special chicken had been run over by a car.

Thandeka finally confessed to eating her father’s special chicken and lying that it had been run over.

“I was pregnant in 2007 and I was craving meat. I had no money and this chicken was running around the yard so I grabbed it and ate it.”

“That is why I lied to my father. I told him his special chicken was hit by a car. Since then my father has been very worried and ill. He always asked me what happened to the chicken but I kept lying to him.”

But apparently the dead chicken is now haunting Thandeka.

“Since eating the chicken I have become an alcoholic. I fight with my boyfriend every weekend and once I was arrested for shoplifting. People don’t want me near them because they think I am a thief and my three-year-old son suffers from terrible eczema,” she said.

“My guilty conscience tells me it is because of my father’s chicken,” she said.

“I am so sorry. This chicken was very special to my father.”

The chicken was not only special to her father, it was reportedly a well-known and special chicken to the entire community.

Sivuruvuru (which means “shake things up”) told Daily Sun: “I always thought my chicken was killed by a car but today I am shocked and disappointed to find my daughter ate my chicken.

He said because of his chicken he never lost a court case.

“The people call me Sivuruvuru because of the work I did with that chicken,” he said

“Wathabatha, my white hen, was a gift from the ancestors.”

He said he is deaf and partially blind but Wathabatha was his eyes and ears.

“I would put her on my head or my shoulder and walk with her to the court where she would inspect the yard,” he said.

He said it is possible for him to forgive his daughter.

“But she must buy me another white chicken to replace Wathabatha. We will keep the chicken in the village for breeding,” he said.