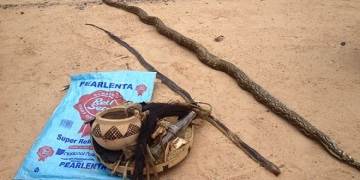 Miriam Ndlovu, the owner of the Lobengula house where two huge snakes were found on Friday, in what is suspected to be an act of witchcraft, says she wants to take the serpents to Beitbridge, her rural home to perform a ritual to “catch who ever sent the snakes to her.”

Ndlovu woke up Friday morning to find a black mamba and a dead python together with a winnowing basket in front of her house.

Ndlovu, who is a former traditional healer told Radio Dialogue that she wants to take the snakes to her father for a ritual to unearth the identity of the people behind the planting of the giant snake.

“My father is a very traditional person and I want to take the snakes and other strange things that were found at my house so that we catch the people who are behind this thing,” said Ndlovu.

The dead python, measuring up to about three metres was found alongside tied with black cloth. The live cobra was wrapped in a black cloth and placed in a home-made winnowing basket filed with rapoko, raising speculation that the incident was fuelled by witchcraft.

“I know that they are people who are peddling rumours saying that I am a witch, I stopped being a traditional healer in 1991 and I am now an active Christian,” said Ndlovu.

Narrating how events unfolded after the discovery of the humongous snake, Ndlovu said the big snake was already dead and later discovered that there was another one wrapped in a black cloth.

“I used a cooking stick to kill it,” she said.

Ndlovu said she would also take the cooking stick to her rural home for some rituals, as she suspects he strange items were dumped at her gate around 2AM.

She said she saw a car flashing some lights and two men and a woman disembarking from it but she didn’t suspect anything, assuming they were neighbours.

Ndlovu claimed she was warned through a dream that some strange things would happen to her.

“I prayed as I retired to bed last night because I could feel that something was wrong,” said Ndlovu.