YOU CAN ACHIEVE THE AMERICAN DREAM, YOU JUST HAVE TO HAVE ONE

Alix Schoelcher Idrache, originally from Haiti, graduated from the U.S. Military Academy at West Point May 21 and soon became an online sensation.

The photo of Idrache standing in the front row during the graduation ceremony, with tears covering his face, went viral shortly after it was posted on the academy’s Facebook page.

“I woke up this morning and found my face all over Facebook and with it myriad of amazing comments about my accomplishments,” Idrache wrote on Facebook, the Washington Post reported. “I am humbled and shocked at the same time. Thank you for giving me a shot at the American Dream and may God bless America, the greatest country on earth.” 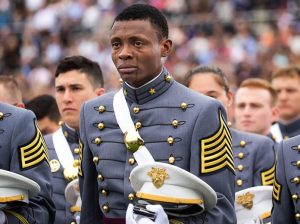 Three men in uniform happily embracing (DOD/U.S. Army Sergeant Ryan Noyes)
Newly commissioned Second Lieutenant Alix Schoelcher Idrache (center) graduated from West Point at the top of his class in physics. (DOD/U.S. Army Sergeant Ryan Noyes)
In seven years, Idrache went from speaking basic English in a working-class neighborhood in Port-au-Prince to graduating from one of the most prestigious military and educational institutions in the United States.

In his youth, Idrache witnessed U.S. forces conducting humanitarian missions in Haiti, the Army reported. Idrache credits his father, who stressed education, for his success since coming to the U.S. in 2009.

This July, Idrache will enter the U.S. Army Aviation Center of Excellence at Fort Rucker, Alabama, as West Point’s top-ranking graduate in physics this year.

“No greater feeling than that of accomplishment!” Idrache posted on Instagram.

2 thoughts on “YOU CAN ACHIEVE THE AMERICAN DREAM, YOU JUST HAVE TO HAVE ONE”