They met on a dating site and went bowling. It was a setup, police say, and now he’s dead.

There was no reason for Adam Hilarie to believe anything but the obvious: He had just been on a promising first date with a pretty girl.

Hilarie had met Hailey Rose Bustos on PlentyOfFish, which bills itself as the largest dating site in the world. He’d picked her up and they went bowling in Winter Haven, Fla., at Cypress Lanes, which offers shoe and lane rentals for a quarter on Thursday nights, and specials on pizza and beer.

A few hours later, the pair ended up at his place, where they talked a bit more and met up with his roommate.

Local Headlines newsletter
Daily headlines about the Washington region.
Sign up
Hailey Bustos is charged with murder in the killing of Adam Hilarie, a man police say she met on Plenty of Fish and intended to rob. (Photo courtesy of Auburndale Police Department) Hailey Bustos (Auburndale Police Department)
Then, Hilarie dropped his date off at home.

Bustos sent the single father a text afterward: She’d had a good time, she wrote to Hilarie, and wanted to meet up the following night at his place.

The next night, her real intentions became clear, police told The Washington Post.

Bustos, 18, brought three men with her to Hilarie’s place, including two career criminals on probation for violent felonies. At least one of the men, police said, had a gun.

When Hilarie, 27, responded to the knock on the door, the men overpowered him and dashed inside, police said. 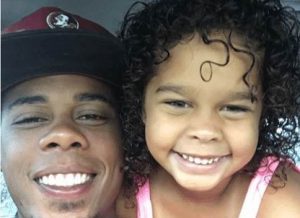 “Hilarie was begging for his life, he was not putting up any kind of fight, and was telling them that he had a 5-year-old daughter,” according to arrest reports obtained by the Orlando Sentinel.

Hilarie was shot in the head and collapsed on the kitchen floor, Auburndale’s Deputy Police Chief Andy Ray told The Washington Post.

With Hilarie on the floor in a pool of blood, Ray said, the suspects went downstairs, pulled their car to the front of the apartment and began stealing the dead man’s Xbox, iPhone and TVs — valuables Bustos had spotted the night before.

A witness told investigators that Bustos had been involved in at least one similar robbery before, Ray told The Post.

For her role in the deadly robbery of Adam Hilarie, Bustos was paid $50 in cash, police said.

Johnny Jackson told The Post that Hilarie, his brother, took Bustos to the same bowling alley the siblings used to go to as kids.

“When it came to sports, he was always the number one pick,” Jackson said. “He did a little amateur boxing, but he was one of the biggest Florida State fans. We was raised that way. We don’t wear the rival colors. We don’t put our kids in them.”

Nobody was more important to Hilarie than his daughter, Lajaya, he said. “He really loved his daughter,” Jackson said. “That was his world.”

Jackson said he didn’t know how long his brother and Bustos had been talking on PlentyOfFish. He estimated that Hilarie had been on the site less than two months, because that’s when Hilarie broke up with his last girlfriend. The brothers had talked about the site because Jackson is also a member.

“Half of the profiles, they don’t even put their real name,” Jackson said. “I see girls on there that their occupation is getting money. I stay way away from them.”

Ray, the deputy chief, said it’s unclear whether Bustos used her real name. At a news conference, he said he suspected that she was experienced with the scheme.

“Her comfort with the way this went, didn’t seem like it was her first time,” he said. “If she hasn’t done it before, then she has talked to people who have done it.”

It is unclear whether Bustos has hired an attorney, and her family members could not be reached for comment.

Using the lure of Internet love to get money from unsuspecting people is a scam as old as the Web itself. Experts say people are getting better at spotting many of the Internet’s longtime scams: They’re suspicious of unsolicited emails from the Nigerian royal family, and they ignore the romantic entreaties of beautiful lovestruck women who sound vaguely like badly programmed algorithms.

But the criminals are getting smarter, too. And on dating sites, would-be scammers have a trump card: People are irrational when they’re looking for love.

“Romance is by definition quite irrational,” Jack Levin, co-director of Northeastern University’s Brudnick Center on Violence and Conflict, told The Post. “And the smartest person can be taken in during the early stages of the dating process. Except now it’s more sophisticated and easier for someone to lie and cheat and fabricate because they can pretty much change their identity to make it fit a new reality.”

Scammers, Levin said, “are experts at presentation of self. When you’re dealing with the Internet, you don’t need the resources that you might need in an interpersonal relationship, or face-to-face. But on the Internet all you need really is to be very skillful at presenting yourself as something that you aren’t. And it’s so much easier for someone to do that online.”

It’s unclear how many people across the United States have been caught up in so-called romance schemes, although the FBI and the FTC have both issued warnings against them.

“Millions of Americans visit online dating websites every year hoping to find a companion or even a soulmate,” the FBI said just before Valentine’s Day, adding that “the FBI wants to warn you that criminals use these sites, too, looking to turn the lonely and vulnerable into fast money through a variety of scams.”

[How well online dating works, according to someone who has been studying it for years]

Most victims walk away with lightened pockets and broken hearts. In rare instances, victims — like Hilarie — can lose their lives.

Still, stories exist across the country of people looking for love but finding violent criminals instead.

In June, robbery victims in Florida told police they had shown up at hotels in Oldmar and Clearwater expecting to meet a woman with the screen name “Curvy Cameron 93.” She never showed; instead, two men with guns held the victims up, according to NBC affiliate WFLA.

Detectives told WFLA that they feared that victims would be afraid to come forward because they would be embarrassed telling people how they got robbed.

That same month, a 36-year-old man was robbed in Ohio after getting together with a woman he met on PlentyOfFish, according to Cleveland.com. As the victim escorted the woman known as “Nikki” to his car, a man with a gun appeared and the pair robbed the victim of $300, then ran away.

In November, the Boston Police Department warned daters to be wary of people they met online after robbers targeted victims who thought they were meeting a romantic interest at a specific address.

“When the person arrives outside that location, they are approached by a male suspect armed with a handgun and robbed of their property,” Boston police said. “As of now, investigators believe there have been 6 such incidents in the past 5 weeks. … 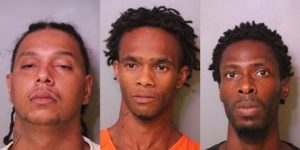 “Members of the public are urged to take precautions when using social media or dating websites because it’s possible you could come across a ‘Catfisher.’ ”

Criminals searching for real-world victims online haven’t just focused on dating sites. Robberies and other violent Craigslist-related crimes across the United States — including multiple slayings — have sparked wariness among some Internet bargain hunters, too, giving police department parking lots a second life as a place to buy stuff from strangers.

“To avoid becoming a victim of these crimes, we urge members of the public to arrange meetings with online vendors in public places, such as local police departments,” John Horn, the assistant U.S. attorney for the Northern District of Georgia, said following the sentencing hearing of a Craigslist robber.

On the website’s personal safety page, Craigslist emphasizes that a tiny fraction of transactions conducted through the site end in crime.

“The overwhelming majority of craigslist users are trustworthy and well-meaning,” the site says. “With billions of human interactions, the incidence of violent crime related to craigslist is extremely low.

“Millions of violent crimes occur in the U.S. each year: 10,000+ homicides, 600,000+ robberies, 5 million assaults. Vanishingly few of these are craigslist-related.”

In the online dating space, finding a safe solution to scams has evaded law enforcement authorities and the sites themselves, according to David Evans, who has tracked the business of online dating since 2002.

The Federal Trade Commission shows what people dating online need to look out for to avoid getting tricked into a money scam. (Federal Trade Commission)
A perfect tool doesn’t yet exist to vet the person at the other end of a match, Evans told The Post. Even if it did, users would be wary of putting sensitive information — a decade-old DUI, for example, or a teenage misdemeanor — on a site anyone could access.

“The dating industry doesn’t have enough usable tools to date to be able to provide additional levels of comfort or confidence in the other person,” Evans told The Post. “If they had done an ID verification, even a simple verification app, that scares people away.

‘Do not go to someone’s home’

In a statement emailed to The Washington Post, a spokeswoman for PlentyOfFish said “the security and well-being of our users is a top priority at PlentyOfFish, and we were deeply saddened to hear of this senseless crime. Our thoughts are with the loved ones of the victim at this time.”

The statement added: “We aim to inform our millions of users of the necessary safety precautions when it comes to meeting someone new, whether it be online or offline. If you’re headed out on a date, always tell someone where you’re going, and ensure it’s in a public place. Do not go to someone’s home, invite them to yours, or meet at a hotel.”

The scheme that ended with Hilarie dead in his kitchen began to unravel days after the shooting.

Bustos, who has a lengthy criminal record, was being investigated for an unrelated burglary charge when she was approached Sunday by detectives. But she drove away and escaped, said Ray, the deputy police chief.

A witness to the burglary mentioned Bustos’s connection to Hilarie’s killing, Ray said, and police investigating his death began to focus their attention on the teen.

On Monday, police announced that four people in the Hillarie case had been charged with murder: Bustos; Andrew Maurice Warner, 26; Gary Terrell Gray, 31; and Joshua Ellington, 26.

Andrew Maurice Warner; Gary Terrell Gray; Joshua Ellington (Auburndale, Fla., Police Department)
Investigators say they believe Warner was the one who pulled the trigger. All four are also charged with conspiracy to commit robbery and robbery with a gun.

Ray said his police department is trying to determine whether Bustos and the other suspects have committed other, similar crimes in the area. He cautioned people on dating websites to be wary when they meet with matches in real life.

“You really shouldn’t take someone to the place that you live,” he told reporters at a news conference. “You should get to know them better than that so you can judge their character and also know their intentions. … Remember you have no idea who you’re talking to. They may present themselves as one thing and be something totally different.”