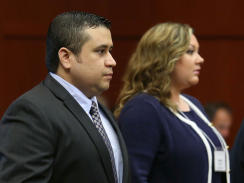 George Zimmerman has been arrested and was en route to the Seminole County Jail, according to Sheriff Don Eslinger.

It’s not clear what happened or what crime he’s accused of committing, but just before 1:30 p.m., Eslinger confirmed that Zimmerman had been arrested today and was being driven to the county jail in Sanford.

He said more information would be available shortly.

WESH-Channel 2 reported that Zimmerman was accused of domestic violence by a girlfriend.

The Sheriff’s Office, in a short news release, reported that the agency had arrested Zimmerman after being called to a disturbance on Topfield Court in western Seminole County near Apopka.
Photos: Orange County jail mug shots

Zimmerman’s new girlfriend lives in that part of the county.

Zimmerman, 30, is the former Neighborhood Watch volunteer, who was acquitted in July on a charge that he murdered Trayvon Martin, an unarmed black 17-year-old, last year.

Since then, Zimmerman has had a string of run-ins with law enforcement. In September he was handcuffed by Lake Mary police but released after his estranged wife, Shellie, and her father accused him of threatening them with a gun while they were moving out her belongings.

Zimmerman had arrived at that scene with a woman, Samantha Scheibe, who was described a few days later as his girlfriend by Shellie Zimmerman’s attorney, Kelly Sims.

Last week, Lake Mary police officially closed that case, saying they had no solid evidence that Zimmerman had broken the law.

When the searched Zimmerman that afternoon, he had no gun.

Check back for updates.