ZIMMERMAN PUNCHED IN THE FACE

George Zimmerman claims he was punched in the face in a Florida restaurant on Sunday, July 31, after talking about the Trayvon Martin case.

The former neighborhood-watch volunteer, who was cleared in the 2012 shooting of the 17-year-old, called 911, asking police to come to the Gators Riverside Grille in Sanford, Florida, at about 5 p.m. on Sunday, the Orlando Sentinel reports. 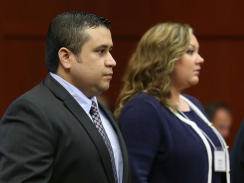 “This man just punched me in the face,” he told a dispatcher, according to a police report obtained by the Sentinel. “He said he was going to kill me. You need to send three or four cops.”

The 32-year-old claims that he walked by a table and complimented a man’s Confederate flag tattoos, according to the Seminole County Sheriff’s Office. When the man, Joseph Whitmer, recognized him and asked about the Trayvon Martin case, Zimmerman was explaining that he shot and killed the unarmed teen in self-defense, when another man walked up and asked, “You’re bragging about that?”

PHOTOS: Celebrity Mugshots
Zimmerman reportedly told the man that he wasn’t, but the man told him to leave the restaurant. Instead, he went back to his table to join his friends. According to the report, several minutes later the man walked over to Zimmerman and the pair scuffled, with the man, who has only been identified as Eddie, allegedly punching Zimmerman in the face and breaking his glasses before leaving the restaurant.

YOU MAY ALSO LIKE
George Zimmerman Charged With Second Degree Murder in Trayvon Martin Case: Stars React to ReportGeorge Zimmerman Charged With Second Degree Murder: Stars React
Trayvon Martin: Stars Rally for Justice for Slain 17-Year-Old
But the New York Daily News reports that several staff and witnesses gave police a different version of the altercation, claiming that the incident was just a shoving match that stemmed from Zimmerman bragging about his infamous history.

“They shoved each other and that was the end,” the restaurant’s owner, Edward Winters, told the News.

Whitmer’s wife told police that Zimmerman approached their table and said, “Hey, I like your racist tattoos,” the Sentinel reports. He then told them about killing Trayvon “to brag,” according to the police report.

In the years since he was acquitted of killing the teenager, Zimmerman has had a number of run-ins with the law, including arrests for domestic incidents, and a road rage incident last year where he was shot by a man named Matthew Apperson.

Zimmerman told the Sentinel that his assailant thought he was Apperson.

16 thoughts on “ZIMMERMAN PUNCHED IN THE FACE”