11 YR OLD BOY WHO WANTED TO BECOME A DOCTOR, DONATED HIS ORGANS BEFORE HE DIED 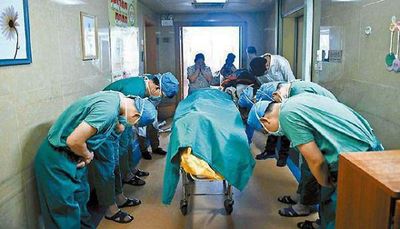 KTVU
Shenzhen, China —
The parents of 11-year-old Liang Yaoyi were stunned by his request.
As cancer ravaged his body, the fifth grader from the Chinese city of Shenzhen focused on how he could save others if he could not survive his own battle.
“There are many people doing great things in the world,” he said from his sickbed according to the ChinaDaily.com. “They are great, and I want to be a great kid too.”
He told his parents he wanted to donate his organs so others could live.
On Friday, the brave young boy who dreamed of becoming a doctor lost his battle with brain cancer. Immediately, doctors went to work removing his organs for transplant.
Hospital officials said his kidney and liver were transplanted into other patients who were suffering from life-threatening ailments.
As his body was wheeled for the surgery room, the medical team stopped and formed an honor guard, bowing to the gurney carrying Yoayi’s remains in honor of the brave boy.
The photo triggered social media responses from around the world. In his final hours, Liang Yaoyi’s choice and life had touched the lives of millions.
Trending on Facebook

0 thoughts on “11 YR OLD BOY WHO WANTED TO BECOME A DOCTOR, DONATED HIS ORGANS BEFORE HE DIED”