6 MURDERS IN 24 HOURS IN MOBAY

A man clears blood from in front of the cookshop where four men were slain Thursday night. (Alan Lewin)

Marauding gunmen have snuffed out the lives of six people during two incidents at shops in St James between Thursday night and Friday night, despite the strong patrol of members of the security forces across the parish.

The fresh killings have again raised the fear level of the people of the St James parish capital and its environs as, for many of them, there seems to be no end in sight to the bloodbath that has intensified over the last two years.

The latest incident played out at a shop on the Bread Lane section of Paradise Acres Friday night.

The two deceased have been identified as 56-year-old Albert Ewan and 20-year-old Kenardo Woolery. 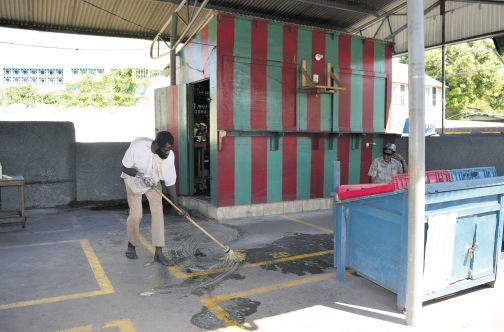 Two other men are admitted to hospital after they were shot and injured during the incident.

Police report that about 8:15 pm gunmen sprayed bullets at a group amassed at a shop in Paradise Acres. After the shooting died down the bullet-riddled bodies of Ewan and Woolery were found.

They were rushed to Cornwall Regional Hospital where they were pronounced dead.

The Montego Hills police are investigating.

The incident came while the police were still probing Thursday night’s murder of former national footballer Devon Dunkley and three others at a ‘cookshop’ that he operated here.

Dunkley, commonly called “Kid Harris”, who represented Seba United Football Club as a goalkeeper and who lived at William Street in Montego Bay; Raphael Williams, also of William Street; Percival Topper of 10 Paradise Row; and Melvin Osbourne, also called Gabriel, who was said to be of unsound mind, were gunned down in a hail of bullets Thursday night.

The St James police reported that about 10:15 pm Dunkley was among a group watching television at his eatery when men jumped from a motor car and fired several shots at them.

The latest double killing has pushed the murder tally in St James for 2017 to 41.

A police source said Dunkley may have been the target of the attack at the ‘cookshop massacre’, but no motive has been established for the second attack.

Last year, the St James Police Division recorded 268 murders, the highest of all 19 police divisions that make up the Jamaica Constabulary Force.

The six killings conjure recollections of one of the bloodiest weeks in the parish last September, during which over a dozen murders were recorded.

That flare-up prompted a visit to sections of the parish by Prime Minister Andrew Holness, who was accompanied by Minister of National Security Robert Montague, then Commissioner of Police Carl Williams, then Chief of Defence Staff Major General Antony Anderson among several other key stakeholders.

Following the tour, Holness hosted a press conference followed by a meeting with stakeholders from the parish.

During the press conference it was announced that St James would see an increase in the allocation of members of the security forces. Since then, the parish has seen a large allocation of police and soldiers.

But it was also announced that by December 2017 the parish would be split into two divisions as another tactic to reduce crime.

Recently, commander of the St James Police Division Marlon Nesbeth announced that the cutting up of the parish into two divisions is still on the cards, noting that they will be named north and south divisions.

But he pointed out that locating a suitable headquarters for the soon-to-be-established southern division is causing some delays.

He revealed that the initial plan was to have the new divisional headquarters within the Anchovy police area, but talks with landowners had hit a snag and the police are now looking at other possible locations.