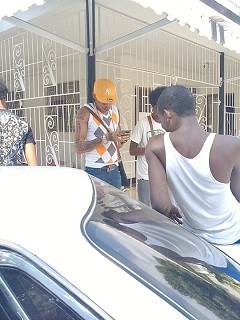 Andre St. John wears a pink shirt and a neck tie with a shocking green pair of trousers. His hair is kept like Medusa from Greek Mythology – twisted, curled, a bit unkempt. He is a light skinned young man – seems naturally so.

(Picture above of Medusa from Greek mythology for illustration purposes only of the hair of Mad Suss. His hair is twisted and curled under without the snakes ofcourse)

He is called Mad Suss. He is the last of the five accused in the dock. He stands and speaks in his defence to the very serious charge of murder.

Here are my verbatim notes of his unsworn statement from the dock.

My name is Andre St. John. I am a professional barber and a simple caring father. I have a 6 year old girl. Due to a traffic accident – car accident in 2006, I lost my baby mother.

I am here in this box as an accused man only because of the fact of being associated with Vybz Kartel. I don’t know where Clive Williams is and I did not see him on 16th of August 2011. On that day I can’t recall the time that Lamar Chow came to the yard at Swallowfield. I was on my way out heading towards my barber shop also located at 59B Mannings Hill Road.

While I was walking out Lamar Chow entered the yard – unaware the dog was loose. The dog attacked him. Vybz Kartel tried to protect him
Judge – just a minute please (signalling St. John he needs to slow down)

He got bit. I got hold of the dog and took him to the back of the premises and tied him up. When I reached down the front of premises I saw Vybz Kartel and others run in the yard. I then left towards my barber shop at Mannings Hill Road where I also live as a tenant.

I don’t know of anything of a plot or plan of any murder whatsoever. It is a plan from Lamar Chow and the police. I don’t know where Clive Williams is and I am an innocent man. That is all I have to say. Thank you.