9 YO BULLY SHUT DOWN TRINIDAD SCHOOL 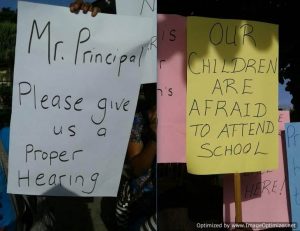 Fearing that their children may be seriously injured by a nine-year-old bully, parents of pupils attending the Santa Rita Roman Catholic Primary School staged a protest on Monday.

Holding up placards, the parents claimed that the male pupil had attacked pupils and teachers in recent months. Parents said the child had become uncontrollable and called on the Minister of Education to intervene.
The school is located in Tabaquite, Rio Claro.

Parent Savitri Persad said the alleged bully had attacked several pupils, the most recent being an 11-year-old pupil. She said the older pupil was choked and kicked.

“We also have reports that he pelt box lunch at the principal and attacked teachers. He is even going into the girls’ washroom and harassing them. This has to stop and the parents are prepared to take action,” she said.

About 45 parents along with their children protested outside the school gates. The placards read “Not another child”, “This is our children’s safety”, “Our children are afraid to attend school”, “Teachers afraid to teach” and “Safety not guaranteed” among others.
Persad the nine-year-old boy was suspended from school on several occasions. He returned to school last week, attacked another child, and has not returned since.

“We are not asking for the child to be removed from school. We cannot deny a nine-year-old child an education. But something needs to be done. We cannot have one boy holding an entire school to ransom,” she said.

Persad said the incidents were reported to the police and Ministry of Education. “The police can only do so much since it involved a pupil at school. But the ministry is taking too long. We need some action. The minister needs to come and hear our concerns,” she said.

She said counsellors were assigned to the child last year, but nothing has changed. Persad said parents were prepared to keep their children at home until action is taken. Rio Claro police confirmed that a report was filed and the matter was referred to the Ministry of Education.

4 thoughts on “9 YO BULLY SHUT DOWN TRINIDAD SCHOOL”