ADMIRAL BAILEY CAUGHT ATTEMPTING TO OBTAIN PASSPORT IN ANOTHER NAME 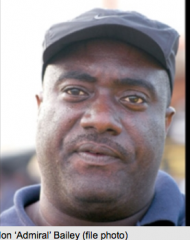 Entertainer Glendon ‘Admiral’ Bailey was on Monday slapped with several fraud-related charges.
Reports are that about 10:30 am, Bailey attended the Passport Immigration and Citizenship Agency (PICA) offices and attempted to renew a passport in the name Micheal George Sullivan. During the renewal process his true identity was revealed. He was subsequently detained by investigators from PICA, according to a news release from the Corporate Communications Unit.
He was charged with;
1. Two counts of uttering forged documents
2. Two counts of obtaining passport by false pretence
3. Two counts of possession of forged documents
4. One count of attempting to obtain a passport by false pretence
5. One count of conspiracy to defraud
Bailey is scheduled to appear in the Corporate Area Criminal Court on Thursday March 5, 2015.