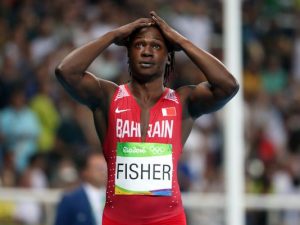 A close friend of Usain Bolt believes his Olympic dream was ruined by an overeager helicopter pilot who wanted a closer look at the Jamaican sprint star.

Andrew Fisher, a Jamaican who now competes for Bahrain, false started from lane three – two across from Bolt – in the second semifinal of the 100 meters at Olympic Stadium on Sunday night.

He claimed he was distracted by a helicopter noisily swirling just overhead as he got into position for the start, causing him to jump too early. Fisher was seen as a potential finalist.