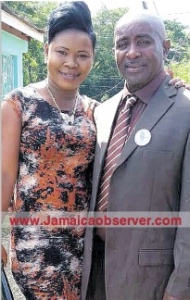 SIX children are left without parents following a murder/suicide that rocked McCook’s Pen just outside of Spanish Town in St Catherine, Monday evening.
The police report that about 6:10 pm, the bodies of Dave Smith, a 52-year-old tiler and his 27-year-old common-law wife Jodi-Ann McNerr were found in a two-bedroom board house located in the farming community.
Reports from the Corporate Communications Unit (CCU) are that Smith and McNerr were in an argument earlier in the day when she was stabbed several times. Her body was later found in the house in a pool of blood. The body of Smith was discovered not far away hanging by a length of rope.
Residents say they suspect that the killing was the result of their relationship having turned sour as the two had separated earlier in the year and had made several attempts to reunite.
McNerr leaves behind two children, aged five and seven from another relationship, while Smith died leaving four children.
Residents in the area have expressed shock and anger at the incident.
“Right now I still can’t come to terms with this tragic incident. This can’t be real,” said a man who identified himself as Michael.
He was among a group of residents who said that they did not see any indication that the relationship would end in such a gruesome manner.
One person who was left trying to come to grips with the incident was Paul Smith, 27-year-old son of the man who was accused of carrying out the attack.
“All now mi can’t come to terms with what has happened, my father was a person who always had big plans and who was always looking to improve his way of living.”
“I never saw this coming,” said the obviously distraught man.
As he sat talking about the incident Smith said that he had to remain strong to provide support for his siblings who were now left behind.
The incident is the second case of murder/suicide recorded in the St Catherine North Police Division since the start of the year.
In the first incident a policewoman, 28-year-old Pagiet Davie who was assigned to the Flying Squad Division, was shot and killed by her common-law husband, 28-year-old Sheldon Doufe, who is believed to have killed himself afterwards.

0 thoughts on “ANOTHER MURDER SUICIDE”