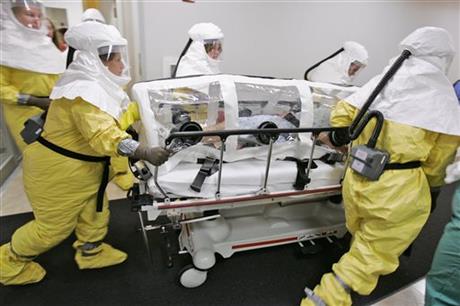 FREETOWN, Sierra Leone (AP) — A surgeon working in Sierra Leone has been diagnosed with Ebola and will be flown Saturday to the United States for treatment, officials from Sierra Leone and the United States said.
Dr Martin Salia is being taken to Omaha to be treated at the Nebraska Medical Center, Sierra Leone’s chief medical officer, Dr Brima Kargbo, told The Associated Press on Friday. The US Embassy in Freetown said Salia himself was paying for the expensive evacuation.
A Sierra Leone citizen, the 44-year-old Salia lives in Maryland and is a permanent US resident, according to a person in the United States with direct knowledge of the situation. The person was not authorised to release the information and spoke on condition of anonymity.
The doctor will be the third Ebola patient at the Omaha hospital and the 10th person with Ebola to be treated in the US The last, Dr Craig Spencer, was released from a New York hospital on Tuesday.
The Nebraska Medical Center said Thursday it had no official confirmation that it would be treating another patient, but that an Ebola patient in Sierra Leone would be evaluated for possible transport to the hospital. The patient would arrive Saturday afternoon.
Salia is a general surgeon who had been working at Kissy United Methodist Hospital in the Sierra Leone capital of Freetown, according to the person familiar with the case. He came down with symptoms of Ebola on November 6 but test results were negative for the deadly virus. He was tested again on Monday, and he tested positive. Salia is in stable condition at an Ebola treatment centre in Freetown. It wasn’t clear whether he had been involved in the care of Ebola patients.
ADVERTISEMENT