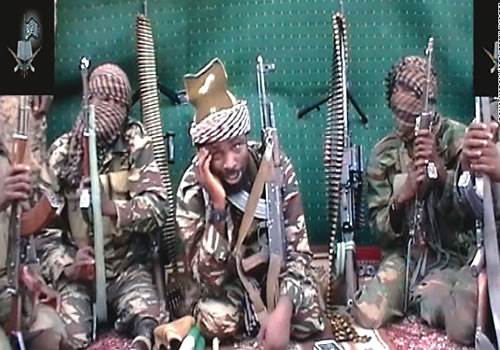 FOLLOWING the take over of Gwoza town in Borno State and the recent occupation of the terrorists in Madagali, in Adamawa State, the Islamic extremists have reportedly taken over churches and declared sharia in the areas.
ADVERTISEMENT
Director, Social Communications of the Catholic Diocese of Maiduguri, gave the revelation on Thursday, in an electronic statement sent to journalists in Maiduguri, the Borno State capital.
Boko Haram leader, Abubakar Shekau, had, last week Thursday, declared Gwoza town seized by his men and, in a video obtained by AFP, said his group would not leave the town.
The Nigerian military initially denied that Boko Haram had taken over the town but on Wednesday, the military, through the Director, Defence Information, said it would soon reassert Nigeria’s sovereignty in portions that had been violated illegally by Boko Haram.
According to a statement by the Catholic Diocese, Boko Haram had advanced in its rampage and had declared a caliphate in Gwoza, a town bordering Borno and Adamawa states.
“As it is well known, the Catholic Diocese of Maiduguri covers the whole of Yobe, Borno and Adamawa states, the three states under strict emergency rule.
“Apart from the churches within Maiduguri that have great share of such attacks by the terrorist group, all the churches on the major road linking Maiduguri and Adamawa State have been closed down due to same act of terrorism,” the statement read.
It further added that “St Timothy’s Bama had been under siege since last year. The parish priest, Reverend Father Timothy Cosmas, had long been relocated to a different parish.
“At the early part of this year, St. Peter’s Pulka was badly attacked. Thanks to God, the Pastor, Fatrher James John was luckily unavailable. The terrorists searched and wanted to kill the holy priest of God.
“Lately, precisely on Friday, August 22, 2014, the dreaded group had moved steadily and yet more boldly into Gwoza, which is in Borno State and the neighbouring Madagali Local Government Area in Adamawa State, declaring a caliphate.
“The assisting priest of St. Denis Madagali, Father Aiden Ibrahim, fled the parish with some of his parishioners to the mountains, upon hearing serious fire battle from the terrorists.
“Report reaching the Director, Social Communications, Reverend Father Obasogie, in Maiduguri has it that the whole town and the parish rectory have been occupied by the terrorists, so many structures and items have been vandalised.
“A lot of church structures have been burnt. Christians in the town are really in a terrible situation. Their houses are now occupied by Boko Haram.”
Reacting to the development, the Borno State Police Public Relations Officer (PPRO), Gideon Jibrin, said he was not aware of the development, but promised to find out.