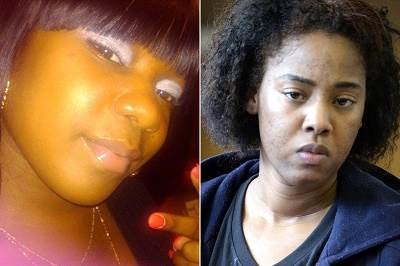 Woman charged with manslaughter in botched butt lift death of Queens 22-year-old
EXCLUSIVE: Cops charged Tamira Mobley of Wood-Ridge, N.J., with manslaughter and felony assault for the death of Tamara Blaine, of Jamaica, Queens, who was found in the Liberty Inn Hotel in July suffering from a seizure. The victim’s mother said she tried to report her daughter missing to cops. ‘When I looked for her, nobody was there for me. That’s just the way it is. Black people only have value when they die,’ Lola Blaine said.

A 22-year-old woman who died under mysterious circumstances in a Manhattan hot sheets hotel last summer was the victim of a botched buttocks lift — and now a New Jersey woman has been charged in the death, police sources said Tuesday.
Tamara Blaine was suffering a seizure when police were called to the Liberty Inn along the West Side Highway in the Meatpacking District the afternoon of July 8. Blaine, who lived in Jamaica, Queens, died a short time later at St. Luke’s Hospital.

The medical examiner ruled Blaine’s death a homicide Oct. 7, noting the puncture wounds in her buttocks. The official cause of death was “a systemic silicone emboly due to a cosmetic silicone injection of the buttocks,” officials said.
On Monday, cops busted self-described cosmetologist Tamira Mobley, 28, of Wood-Ridge, N.J., and charged her with manslaughter and felony assault. Sources said she killed the victim during a botched butt lift using silicone.
Mobley, who has a previous arrest for forgery in the Garden State, was arraigned in Manhattan Criminal Court on Tuesday. Manhattan Criminal Court Judge Bruna DiBiase ordered Mobley held in lieu of $100,000 bail.

On the day of the incident, Mobley used her credit card to pay for a room at the Liberty Inn, which bills itself as “your rendezvous for romance” and has hourly rates. About two hours later, she called the front desk and told an employee to call 911 because Blaine was having a seizure.
he suspect stayed until the Emergency Medical Service arrived but fled before police came. Detectives later tracked her down using her charge card.

Blaine’s mother, Lola, of Jamaica, Queens, lashed out in anger about the case Tuesday.
She said she tried to report her daughter missing to cops but was told nothing could be done because the victim was an adult.
“When I lost her, nobody helped me,’’ the mother said. “When I looked for her, nobody was there for me. That’s just the way it is. Black people only have value when they die.”
Lola Blaine said her daughter was in good health when she last saw her.

“I went in person to the precinct to explain to them. Nobody was there for me,” she said. “They don’t give a damn. They look at her like she’s less than a dog.”
The mom said that when police did respond to her home, they asked if her daughter was mentally retarded or unstable. When told she wasn’t, they said, “There’s nothing we can do. She’s 22,” the mom said.
Lola Blaine said she only learned her daughter was dead when she got a bill from the morgue.
“What am I going to say about her now that she’s dead?” the mother added. “Only someone who has the same problem can understand what I’m going through. Nobody else.”

Friends described Tamara Blaine as someone who liked fashion and always took care with her appearance.
“She liked to look good,” said Monet Robinson, 22. “She liked to look nice. She always switched her style up.”
According to the website for the J. Foster Phillips Funeral Home, which handled her service, Blaine attended grammar school in Flatbush and Saint Albans, then went to St. Joseph’s and Forest Hills high schools.
She had a child, Amari Bermudez, and was taking college classes.
“As a part-time freshman in college, she always remained level headed and determined to make a life for her son,” the site said. “We can only hope that our future generation will have the drive and determination that Tamara did.”

0 thoughts on “DEAD FROM BUTT INJECTION”