Sprint king Usain Bolt lured a young Brazilian student into bed by baring his six pack and pulling his famous victory pose, Daily Mail Online can exclusively reveal.
Jady Duarte has told how the Jamaican star pestered her for sex via the Google Translate app; sneaked her into Olympic Village under the noses of security; then insisted on listening to the raunchy Rihanna song ‘Work’ as they made love on his single bed.
And despite being the fastest man on the planet, Duarte, 20, insisted their bedroom action was more marathon than sprint – spanning two hour-long sessions but stopping short of another ‘triple’.

Speaking out: Jady Duarte, 20, told DailyMail.com how she was the woman Usain Bolt celebrated his 30th birthday and his triple triple with in RIo 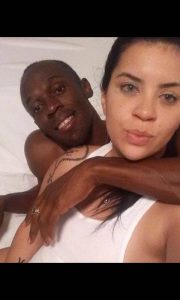 How we met: ‘He was stood in front of us and suddenly he pulled up his shirt and showed us his six pack,’ Duarte went on. ‘I had never seen anything like it. I just had to reach out and stroke it.’

Dressed for the club: Jady Duarte shortly before she met Usain Bolt. She told DailyMail.com how he used the Google Translate to flirt with her

In bed with an Olympic hero: Jady Duarte snapped a series of selfies with Bolt after they had sex. He played Rhianna’s hit song Work and then they listened to music together

Selfie time: Bolt was happy to snap pictures with Duarte in his single bed in the Olympic athletes’ village. He promised to see her again when he returns to Rio for the Paralympics
In bed with an Olympiian: ‘It was very passionate and hot – we were devouring one another. He has the body of a champion although his male parts do not match – he is just like a regular guy,’ Duarte told DailyMail.com

Sneaked in: Bolt took Duarte through security and into the athletes’ village where – despite his multi-millionaire status – he stayed for the duration of the Games

Venue for passion: Bolt and Duarte shared a single bed in his room. Unlike some athletes he did not have to share – the only concession the Jamaican team made to his superstar status
And he was quick to give the crowd exactly what they wanted – his signature lighting bolt pose

This sealed the deal: Jady was hesitating about going home with Bolt – until he made his famous lightning sign and persuaded her to join him in the cab to the athletes’ village
Postings: After she put these pictures online, Jady Duarte’s name went round the world and she confessed to feelings of shame

Postings: After she put these pictures online, Jady Duarte’s name went round the world and she confessed to feelings of shame
But the pair bypassed security by hopping on to an official bus that was quickly waved through the gates.
‘They never asked me for any sort of pass or my ID,’ said the young Brazilian beauty.
‘They didn’t even question him, I guess, because he’s Bolt. We had two other guys with us and I think they were athletes because they also had muscly, fit bodies.
‘I was surprised that he didn’t take me to an expensive hotel but I didn’t pay much attention because we were kissing the entire way.
‘The room was tidy but he had two single beds and they were so small that his feet must have been poking out the end when he slept.’
Duarte, who was abandoned by her parents as a baby and raised by her great aunt in Rio’s impoverished Camp Grande neighborhood, does not speak a word of English.
But they navigated the language impasse by typing flirty messages to one another via the Google Translate phone app.
They both undressed and showered before Bolt played his favorite music on his phone.
‘It was mainly just small talk and him telling me how beautiful I was,’ she said. ‘We used Google but I didn’t need a translator to tell me that he wanted sex.

‘He played the Rihanna song Work. I think he likes to listen to it when he makes love.
‘It was very passionate and hot – we were devouring one another. He has the body of a champion although his male parts do not match – he is just like a regular guy.
‘I was expecting him to be fast but it was actually the slowest sex I’ve ever had. We did it for about 40 minutes then he took a couple of minutes rest before we did it again.
‘He was certainly quick at recovering but we didn’t have sex a third time.’
Duarte says the two lovers took selfies, hung out in bed and listened to music until 9am, when Bolt handed her a 100 Euro note to get a taxi.
Despite the currency being totally foreign to Brazil she says the driver accepted the money.
Bolt didn’t give her his number but promised to call her to arrange a second date during the Paralympics, which starts September 7.
Their steamy encounter quickly made the news when Duarte shared the selfies on Whatsapp and they soon fell into the hands of a local Brazilian tabloid.
Bolt meanwhile, gave the Closing Ceremony the swerve and headed for the airport Sunday night to board a flight to London, where he was photographed hitting the clubs again and leading two women into his hotel.
The famed athlete is said to have a long-term girlfriend – 26-year-old Kasi Bennett – but has made little attempt to hide his rampant womanizing.
In typical fashion, the flamboyant runner (pictured dancing) took to the stage at the De Bracos Albertas club – delighting revelers and fans in the process

Woman number one: Bolt was photographed twerking enthusiastically with a mystery woman – his first conquest of a long night marking his 30th birthday, the end of the Games and his triple triple

Woman number two: Bolt was pictured photographing another brunette at the club before going home with Duarte

Party: The legendary sprinter was singing on stage at the club during his 30th birthday celebrations before getting intimate with at least three women

The same night he picked up Duarte he was seen twerking with one woman and kissing a second inside the club.
According to Forbes, Bolt has amassed $32.5 million over the course of his glittering career.
Those earnings are likely to soar in the wake of his historic ‘triple triple’ – three golds in three consecutive Olympics – with Nike rumored to have offered him an amazing lifetime contract worth $30 million a year.
Duarte, by contrast, has no job and is having to retake her high school diploma after she failed to complete her education because her great aunt suffered a stroke.
She grew up in a tiny household with three children and an income of about 500 Reals – or $155 – a month.
Local reports claimed that she was the widow of one of Rio de Janeiro’s most dangerous drug lords, Douglas Donato Pereira – something which she says is untrue.
Known by his chilling nickname Diná Terror, Pereira commanded the narcotics trade in the Faz Quem Quer shantytown and has been linked to the torture and murder of two teenage girls.
However he was shot dead by elite police troops in March this year before he could face justice.
Partying again: Bolt partied the night away at Soho club Cirque le Soir in London in the early hours of Tuesday, where he has been pictured before, and was seen leaving at 5.45am

Partying again: Bolt partied the night away at Soho club Cirque le Soir in London in the early hours of Tuesday, where he has been pictured before, and was seen leaving at 5.45am
Usain Bolt hits London streets as he celebrates his 30th birthday