SHANIQUE Myrie, the poster girl of free travel through the Caribbean Community, says she has been contacted by Trinidadian friends who have voiced their disgust at the actions of that country’s immigration officers.

Myrie, who was recently awarded damages against Barbados in the Caribbean Court of Justice, says some Trinidadians are not in agreement with the unfair treatment being meted out to Jamaicans. 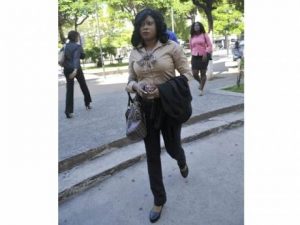 “I have friends who live in Trinidad and they are calling on Jamaicans not to blame the Trinidadian people. It is the actions of the immigration officers. They asked me to tell the people of Jamaica that they love us,” Myrie told the Jamaica Observer.

Last week 13 Jamaicans, including an 11-year-old child, were denied entry into the twin island, forced to sit on a hard bench for an entire night and sent back to Jamaica the next morning.

“I am very disappointed in what happened in light of the recent CCJ (Caribbean Court of Justice) ruling in my favour. The immigration officers think they are a law unto themselves and can do anything they want,” she said.

However, Trinidad Minister of National Security Gary Griffith has come out in support of the immigration officers and claimed that the Jamaicans were denied entry for legitimate reasons.

In a report carried in the Trinidad and Tobago News Day, Griffith is quoted as saying: “Some of them lied about where they would be staying, others claimed to be here for work, but didn’t have proper documentation to support that, and none of their alleged employers showed up to collect them. There was also one woman who told immigration officers she had brought her child to see its father, but the man was also a no-show.”

However, the Jamaicans interviewed by the Observer when they arrived at the Norman Manley Airport last week Tuesday said the immigration officers made no attempt to contact the people who came to pick them up and told them they were being turned back because of the recent murder of a Trinidadian who was visiting Jamaica.

“They told us we were prisoners and that they didn’t want us in their country,” one woman said.

The rejected Jamaicans were not allowed to contact their consulate, an attorney or their relatives as is outlined in the revised Treaty of Chaguaramas.

Jamaican culture is very popular in the twin-island republic and reggae music is heavily rotated on radio stations and cable channels there.

Reggae concerts sometimes attract thousands of Trinidadians to venues such as the Queens Park Savannah.

There are also thousands of rastafarians in Trinidad, a movement that was started in Jamaica.