DIDDY CALLS OUT OBAMA AND ONE MORE SHOOTING IN FERGUSON 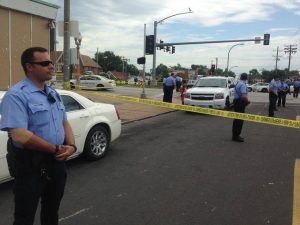 CLICK HERE
ST. LOUIS – One man is dead after an officer-involved shooting in north St. Louis.
The shooting happened near Riverview Boulevard and McLaran Avenue. St. Louis Police Chief Sam Dotson says the suspect pulled a knife on a 6th District officer. No police officers were injured.
The suspect was pronounced dead at the scene, which is located approximately four miles from the unrest in Ferguson.
Within an hour of the shooting, a crowd had gathered in the area.
NewsChannel 5 has a crew at the scene. This story will be updated as information becomes available.