TOO BLACK TO BE TRINIDAD’S PRIME MINISTER 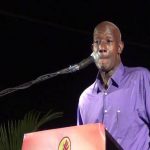 PORT OF SPAIN, Trinidad – Dr Keith Rowley’s dark skin was cited as the only ground of “objection” to his leading Trinidad and Tobago as prime minister, former sena­tor Fitzgerald Hinds said on Wednesday night.

Speaking at a People’s National Movement (PNM) meeting at Belmont Secondary School, held in support of the political leader’s can­­di­dacy, Hinds said: “I know this would break your heart but I will tell you this. One day, at about 1.30 p.m., I was walking through the streets of Port of Spain and I spoke to a former minister of government from a PNM cabinet. And he told me something that troubled me deeply, almost broke my heart, and I am a tough man.

“He said to me that he had just come from a meeting with a couple of other former ministers and some businessmen, and they were all ’round the lunch table and agreed that Dr Rowley had done an excellent job as political leader for the PNM for the last three years…. They thought he did a great job. And told me shockingly that the only issue that came up in objection was that we had never had such a dark-skinned prime minister.”

The crowd voiced disapproval of the expressed view.

“These are touchy issues and I need not publicly upset you tonight. But it is real and I would tell you why. Because shocked as I was, I went to a number of my colleagues, inside and outside of the PNM, and asked them if they think like that or if ever heard anything like that. And to the man and woman, everybody said they heard it before,” he said.

As the crowd continued to voice its displea­sure that such a view was held, Hinds converted the issue into one of humour, “And then I realise I could never be a prime minister mehself.”

The crowd laughed at this point.

Slamming the United National Congress (UNC) for seeking to classify Rowley as a racist, Hinds said he heard the “wotless” Attorney General talking about Rowley not having wide appeal.

Hinds said when he used to attack the UNC senators every Tuesday in the Senate, “looking to lick dem down in the interest of the people of this country”, they (UNC mem­bers) would tell him, “Why yuh don’t behave like Penny.”

Reminiscent of the “Dollar Wine” soca song, Hinds said: “I don’t want to behave like no Penny; no cent, five cent, ten cent; this thing call for dollar!”

The crowd was in uproar. “Jah!” Hinds exclaimed.

He said Jack Warner, Roodal Moo­nilal and Anand Ramlogan were saying Beckles-Robinson was the best person for the PNM leadership. But, he said, one had to be respectful “of our sister”

“I see my sister like a pretty little angel fish in a shark tank—Ramlogan, Moonilal and Warner. Boy, with friends like that, she don’t need no enemies,” he said.

Hinds said among “the small and dwindling” handful of persons opposed to Rowley’s leadership were “those who feel that they had a certain degree of influence in the last administration, which they do not now have, and they are only concerned about themselves”

He said there were those who “were afraid of victimisation because they know the things they have said and done, and they are judging Dr Rowley by their and other people’s standards so they fear that he would victimise them, too.”

But Hinds said when Rowley spoke out about UDeCOTT (Urban Development Corporation), the first minister in the Manning cabinet to attack him was Mariano Browne. Yet, Hinds said, when Rowley became Opposition Leader, the first person who was offered a senatorship was Browne.

“There is another handful of them who just find he too serious. But this country don’t want no joker, no laughy-laughy, smiley-smiley thing. This country calls for serious leadership,” he said.

Hinds said if the general council and the PNM central executive and the deputy political leader came to him and asked him to contest the position of political leader, he would ask two questions: “Is Dr Rowley alive? Is he willing to do the job?” He said if they said yes to both, he would then reply, “Well get away from me!”

“We have seen the mettle of the man and we have come here to endorse Dr Rowley,” she said.

In his column “Peeping Inside the PNM”, in the Sunday Express on Jan­uary 26, political scientist Selwyn Ryan wrote:

“Some of Dr Rowley’s critics claim sotto voce that he is a tad too ‘black’ for a country that is ethnically structured in the way that Trinidad and Tobago is. Trinidad being what it is, however, the view definitely exists both inside and outside the party that a paler face is required if the PNM is going to be regarded as being adequately diversified.’

0 thoughts on “TOO BLACK TO BE TRINIDAD’S PRIME MINISTER”