DOLLAR VAN PASSENGER FIGHTING FOR HER LIFE AS DRIVER DITCHED VAN ,FLEEING FROM THE POLICE 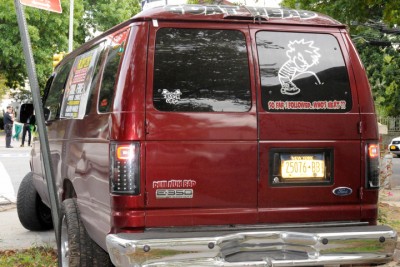 A passenger of a “dollar” van is fighting for her life after jumping out of the vehicle as the driver fled cops in Queens Sunday, authorities said.
Police attempted to stop the red Ford Econoline on 165th Street and Archer Avenue at 4:30 p.m. when it suddenly sped off with the terrified 22-year-old passenger, cops said.
The woman leaped out the back of the van several blocks away, on Union Hall Street, while it was traveling at a high rate of speed, evading police, authorities said.
She was rushed to Jamaica Hospital where she is listed in serious condition, cops said.
The driver, Jameson Golding, 22, ditched his van — essentially a livery vehicle — two miles, away on Foch Boulevard, after it became wedged between a brick wall and a “No Standing” sign.
He ran away on foot, but was caught by cops a short distance away.
Golding was charged with resisting arrest, reckless endangerment, obstructing governmental administration, fleeing an officer in a motor vehicle, reckless driving, aggravated unlicensed operator, unlicensed operator, and leaving the scene of an accident.
Filed under NYPD

0 thoughts on “DOLLAR VAN PASSENGER FIGHTING FOR HER LIFE AS DRIVER DITCHED VAN ,FLEEING FROM THE POLICE”