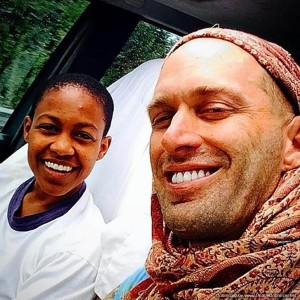 New audio has emerged of “Django Unchained” actress Daniele Watts furiously refusing to cooperate with Los Angeles police officers asking for identification while responding to a complaint that two people were involved in “lewd acts” inside a parked silver Mercedes on Sunday.
“You know how many times the cops have been called just because I’m black and he’s white?” Watts said in audio obtained by TMZ. “I’m just being really honest, sir.”
HEAR THE AUDIO HERE.
“Who brought up a race card? I never said nothing about you being black,” the officer, Sgt. Jim Parker, responds before eventually adding: ”Thank you for bringing up the race card. I never hear that.”
View gallery
.
Daniele Watts and her boyfriend, Brian Lucas (Facebook)
Daniele Watts and her boyfriend, Brian Lucas (Facebook)
Watts insists she was only “making out” with boyfriend Brian James Lucas, a celebrity chef, but TMZ reports witnesses inside the Directors Guild office building told police they saw the couple having sex in the passenger seat of the vehicle, with the door open.
Also read: Black TV Producer Mistaken for Bank Robber: Beverly Hills PD ‘Deeply Regrets’ Error
The patrol officers and sergeant of the LAPD’s North Hollywood Division responded to the 11900 block of Ventura Boulevard in Studio City on Sunday. Authorities said the officers “located two individuals that matched the description of the suspects, and they were briefly detained.”
“Upon further investigation it was determined that no crime had been committed. Ms. Watts and her companion were subsequently released,” the authorities said in a statement.
AUDIO HERE
An internal complaint investigation has been initiated regarding the incident, which Sgt. Parker told Watts should have only taken “five minutes” if she would have offered her ID, as Lucas did without any complaint.
“I want to see your ID. Somebody called, which gives me the right to be here, so it gives me the right to identify you by law,” Sgt. Parker says. “I’m going to get your ID one way or the other.”
“I’d already be gone,” Sgt. Parker tells Lucas after Watts storms off.
Watts is eventually placed in handcuffs for leaving the scene, and it’s during what the officers said was legal detainment that Watts continues to accuse both those who called the police and the police of being racist.
“I bet there is at least one person up there that is a racist. I bet you,” Watts said. “I bet you’re a little bit racist.”
Also read: Wrongfully Detained Black TV Producer’s Arrest Record Probably Won’t Go Away
Watts told CNN during an appearance on Monday (above) that she refused to offer up her ID because she believes “in freedom.”
“If I’m within my amendment rights, my constitutional rights to say no unless you’re charging me with a crime, I will not be giving you my ID,” Watts said. “That is a right that I stand up for because of the shoulders that I stand on, because of the people that fought so hard for their rights that came before me. “Black, white, all people have been fighting for these rights for freedom. It’s beyond race at this point.”
CNN’s Michaela Pereira informed Watts that police in the state of California are permitted to detain an individual for a reasonable amount of time to attain identification if they have reasonable suspicion a crime was committed.
“I still feel strongly like I didn’t have to,” Watts said. “In my opinion, it’s not a crime to be fully clothed showing affection on a public street in our own car. If we’re fully clothed — it doesn’t matter how passionately we’re making out — it’s my right and my pleasure to enjoy myself.”