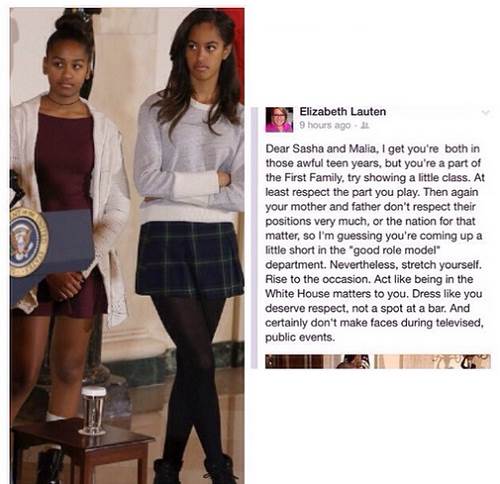 Elizabeth Lauten, the Republican congressional aide who faced backlash after sharply criticizing the first daughters, has resigned, according to a report on NBC on Monday.
Lauten told NBC News that “she is ‘resigning today’ following her comments about Sasha and Malia Obama,” according to a tweet from an NBC News Capitol Hill producer.
Reports of the resignation came after Sean Spicer, the RNC’s communications director, took to Twitter early Monday morning to comment on a recent Facebook post made by Lauten, the communications director for Rep. Steven Fincher (R-Tenn.).
“Children, especially the first daughters, are off limits,” Spicer tweeted before labeling the comments “inappropriate” and “insensitive.”
Over the weekend, a Facebook post made by Lauten after the White House’s annual turkey pardoning ceremony surfaced where the aide sharply criticizes the Obama girls.
The post read, “Dear Sasha and Malia, I get you’re both in those awful teen years, but you’re a part of the First Family, try showing a little class. At least respect the part you play. Then again your mother and father don’t respect their positions very much, or the nation for that matter, so I’m guessing you’re coming up a little short in the ‘good role model’ department.”
It continued, “Nevertheless, stretch yourself. Rise to the occasion. Act like being in the White House matters to you. Dress like you deserve respect, not a spot at a bar. And certainly don’t make faces during televised public events.”
She later issued on apology over Facebook that claimed she “reacted to an article and…quickly judged the two young ladies in a way that [she] would never have wanted to be judged…as a teenager.” Lauten claimed that after “many hours of prayer” and speaking with her parents she saw that her words were “hurtful” and apologized to anyone she had “hurt and offended.”
Her comments have created a media firestorm and even sparked a Facebook page and online petition asking for Lauten’s firing.
But while Spicer felt Lauten’s comments were unfair, he had similar criticism for the media.
“The mainstream media’s coverage of this story is appalling,” Spicer said. “In over 20 years in politics I have never seen 1 of the countless inappropriate comments by Democrats ever covered to a faction of this.”
Fincher’s office didn’t respond to requests for comment on Monday.