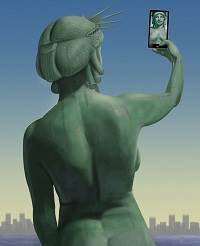 Video from a police dashboard camera showed how a routine traffic stop devolved into an intense incident that involved a high speed chase and a police officer appearing to shoot at van full of children.

The incident began when a woman who police have identified as Oriana Ferrell was pulled over by a New Mexico State Police officer for going 71 miles per hour in a 55 miles per hour zone according to station KRQE-TV in Albuquerque, N.M.

The dash cam shows the woman and the officer arguing, and when the officer goes back to his car to check paperwork, the woman drives away and is pulled over again by the same officer.

When the officer goes to the car a second time he opens the door and demands that Ferrell get out of the car, yelling “Get out of the vehicle right now!”

When she refuses, the officer appears to attempt to pull her out of the car as her five children, ages 6 to 18, according to The Taos News, start screaming in the car.

After a few moments, the woman’s 14-year-old son gets out of the car and tries to engage the officer. But the officer pulls his taser and the teenager goes back into the car.

As the officer tries to get the woman to leave the car, he tells her that she is already facing charges for leaving the scene after she was first pulled over.

“Look, I’m going to ask you one more time to get out of the vehicle and then I’m going to pull you out, OK?” the officer said. “You’re already facing evading charges. You ran away from me.”

“Sir, I pulled back over, I didn’t run away,” the woman said. “You see my children. I’m not doing anything wrong. I’m just trying to take them to the Rio Grande.”

As back-up arrives, the woman and her family are locked inside. The officer takes his baton and starts to break the windows of the van as he tries to get the family out of the car.

At that point the woman starts to drive away, and another officer who came on the scene later appears to fire three shots at the back of the minivan even though five children were in the back seat.

The woman leads the officers on a 10-minute chase before stopping in front of a hotel and turning herself in. Both the woman and her 14-year-old son were arrested.

The actions of the different officers and the fact that the routine traffic stop ended with an officer shooting at a car and a high speed chase has led to an internal investigation, the New Mexico State Police told ABCNews.com. However, the officers involved have not yet been removed from active duty.