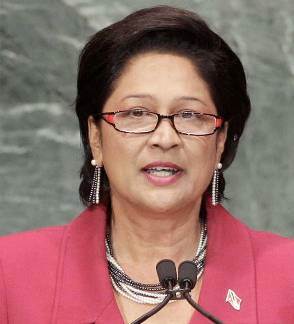 T&T accepts invitation for talks in Jamaica on immigration issue

PORT OF SPAIN, Trinidad (CMC) – Prime Minister Kamla Persad Bissessar has welcomed the move by Jamaica to hold talks on the issue involving the deportation of 13 Jamaican nationals saying she had advised Foreign Affairs Minister Winston Dookeran to accept the invitation from his counterpart to travel to Kingston to discuss the matter.

“A letter…of invitation from Jamaica and I have advised him to accept the invitation and to go to Jamaica and speak with his counterparts there,” Persad Bissessar said.

Dookeran later told the Caribbean Media Corporation (CMC) that he expects the meeting would take place as soon as all the necessary logistics were in place.

Earlier this week, Jamaica’s Foreign Minister AJ Nicholson said “the number of Jamaicans being returned from Trinidad and Tobago had generated considerable public outrage and had the potential to undermine confidence and diminish goodwill on the part of many Jamaicans towards Trinidad and Tobago and the wider regional integration movement.

“I believe that our personal intervention and collaboration can go a far way in bringing this issue to a speedy and successful conclusion,” Nicholson said, adding “this is of the utmost importance as a regional integration movement which does and is perceived as protecting and advancing the interests of all sides is vital to the progress of our regional enterprise.”

He said he hoped the talks would take place before year end.

Media reports had indicated that the 13 Jamaicans were denied entry into Port of Spain on Tuesday last week and deported to their homeland the following day after being detained.

The Ministry of Foreign Affairs in Jamaica has since issued a warning to Jamaicans travelling to Trinidad and Tobago saying it was also “concerned at this development and continues to interface with the relevant authorities in Trinidad and Tobago on the matter” particularly in light of the Shanique Myrie ruling by the Caribbean Court of Justice”.

The CCJ earlier this year ruled that Barbados had breached the right of Myrie when she sought entry into the country in 2011, but stopped short of awarding the one million Barbados dollars in compensation she had sought.

Myrie, 25, had been granted leave by the CCJ to file the action, alleged that when she travelled to Barbados on March 14, 2011 she was discriminated against because of her nationality, subjected to a body cavity search, detained overnight in a cell and deported to Jamaica the following day.

Jamaica said it was urging nationals who believe their rights under the CARICOM Single Market and Economy (CSME) regime have been breached, to make a report to the Jamaican High Commission or the Foreign Affairs Ministry.

While referring to the CCJ ruling, Persad-Bissessar said although there was a provision for granting CARICOM nationals an automatic six-month stay upon entry, there were certain exceptions to the rule.

“There is a procedure that should be followed if one is refused entry, so we are looking into all of that with a view of upholding the law as pronounced upon by the CCJ,” said Persad Bissessar.