Administrative staff of the Cornwall Regional Hospital (CRH) yesterday worked under tents on the grounds of the facility yesterday, a day after noxious fumes forced them to abandon sections of the hospital.

Technical teams, meanwhile, were seen working yesterday trying to remedy what has become a recurring problem at the regional hospital.

On Tuesday, Anthony Smikle, CEO of the CRH, told the Jamaica Observer that workers in the affected areas were relocated, based on directives from the Western Regional Health Department and the Ministry of Health. 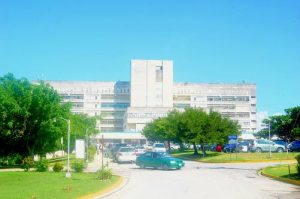 According to Smikle, there was a similar problem last year which had also forced a temporary relocation of services to other areas of the facility.

“We had problems with the air quality system and had made some adjustments; move the clinics and move some of the diagnostic areas, last year,” Smikle said.

He explained that following measures to address the problem staff members were moved back to their original work areas and full services restored.

“We cleaned the system and January we went back in. Soon after one or two departments had problems. Then within a few weeks a lot of the original departments that were having problems started to report that problems were still there,” Smikle told the

He added: “A team of engineers is looking at the problem to see if there are any complex issues to deal with and we will get an interim report as to how we should approach. In the, meantime, we have taken the precautionary measures because of the patients and workers who use the facility.

One thought on “FUMES TAKE OVER CORNWALL REGIONAL”