Whole Foods Market plans to take legal action against a customer who claimed a bakery employee wrote a gay slur on a cake he purchased from its flagship Austin, Texas, store.

Jordan Brown, a pastor at the Church of Open Doors in Austin, received nationwide media coverage Monday after he shared a photo of the cake with “LOVE WINS” — followed by an anti-gay epithet, inscribed in blue icing on it.

“That’s not the cake I ordered, @WholeFoods and I am offended for myself & the entire #LGBT community,” Brown tweeted. He and his attorney, Austin Kaplan, filed a lawsuit against the grocer. 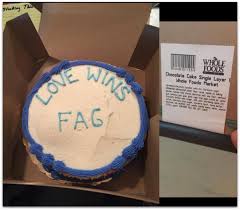 Austin Pastor Jordan Brown tweeted this photo of a cake he said he’d ordered at Whole Foods. NBC News has blurred out a section of the cake that contains a gay slur. @PasJordan
Whole Foods said in a statement Monday it denied the slur had been written by the employee — who, they said, “is part of the LGBTQ community.”

Then on Tuesday, after further reviewing the case, the chain announced it believes Brown’s “accusations are fraudulent and we intend to take legal action against both Mr. Brown and his attorney.”

In a counter-suit, Whole Foods Market Rocky Mountains/Southwest, which operates the store, disputed that an employee wrote any slur on the cake, reported NBC affiliate KXAN. The company said it is seeking at least $100,000 in damages, sanctions against Kaplan, and a jury trial.

“We appreciate the team members and shoppers who recognize that this claim is completely false and directly contradicts Whole Foods Market’s inclusive culture, which celebrates diversity,” the company’s statement said, adding that Whole Foods bakeries have a ban on accepting orders that include offensive language or images.

The cake’s inscription would have been visible “through the clear portion of the packaging” when Brown bought it, Whole Foods noted. The store even posted security footage of Brown, in an orange T-shirt and jeans, paying for the cake at the register.

“We stand behind our bakery team member,” Whole Foods said.

Image: Texas pastor accuses Whole Foods of writing anti-gay slur on cake
Pastor Jordan Brown takes a moment to compose himself as he is overcome with emotion during a press conference as he speaks about how he felt when he saw a gay slur on a cake he says had ordered from Whole Foods on April 18 in Austin, Texas. Ricardo B. Brazziell / Zuma Press
On Monday, Brown claimed he didn’t look at the cake until he got into his car after leaving the Whole Foods.

“For me, it was humiliating because being a pastor who is also openly gay I’ve had to deal with this in the past,” he said at a press conference. “The feeling that I had just resurfaced a bunch of painful memories.”

Whole Foods’ Facebook page has been flooded with responses to the cake controversy, with many accusing Brown of being a liar.

“This is a bad hoax. No way could he not have seen the word if it was on the cake before he left the store,” wrote on commenter.

But even after the updated statement was published on Whole Foods’ website Tuesday, some still backed Brown.

“I will never visit Whole Foods again. Ever,” wrote one.

Whole Foods was recently embroiled in another social media storm: Last month, customers slammed the environmentally-friendly grocer for packaging peeled in oranges in plastic instead of just selling them with their skin on