When Vanessa Liscombe got pregnant at 16, she never saw her life going further than motherhood.

“That was, I would say, the worst time of my life because, despite the fact that I was doing well in school, persons did not accept this girl who does fairly well in school and yet still end up having a baby,” Liscombe revealed.

“Though persons tend to pull away, started treating me differently, never wanted to be my friend, had negative stuff to say about me… they just wanted to put me down, I did not let that stop me. I continued school after having my baby. I started using the negativity that persons had to say about me as a stepping stone to complete my studies, even though this is just the beginning,” she continued.

Four years later, the 20-year-old is excited to be pursuing her first degree in radiology at The University of the West Indies.

“I don’t know where the funds are coming from, but I’m going. I will be the first in my family to actually attend a tertiary institution and I’m excited,” the young woman said.

“Now I am actually a mentor for teen moms knowing that it’s not just the end of the road that you get pregnant and are a mommy, a teen mom, but you could still continue,” she added.

Through the initiative called Developing Empowering a Nation to Succeed (DEANS), Liscombe has become of service to her community with the aim of improving people’s lives.

Based in the Race Track community in Clarendon, the DEANS group focuses on mentoring youth in the community to become better contributors to society.

“We’re a group of youths who want to give back as much as we can; not just financially, because we are not from rich backgrounds. So we do mentorship, we volunteer at homes, infirmaries and we do motivational speeches,” Liscombe, the group’s vice-president said, noting they want to make a change in the country. 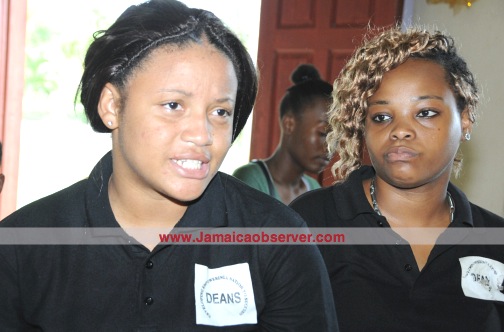 Her colleague, Raheem Barrett, who serves as the group’s president, told the Jamaica Observer that the group provides positive role models in a community riddled with negative influences.

The initiative was started in February when he and his team realised that the youth in the community were without proper role models and had nobody to speak to.

“So them seeing us, being that we are not from rich backgrounds, seeing that we’re not well off and they see that we do very well in school, that’s just really the central part of what we do; you know, taking a youth, showing them that you can be successful no matter the odds that are against you,” said Barrett, who has been accepted to study medicine in China.

In addition to volunteerism, the DEANS youth have hosted an appreciation luncheon for social workers and guidance counsellors.

“You know you have Teachers’ Day, Mothers’ Day and so on, but you don’t have a Guidance Counsellors’ day and, you know, they are faced with very serious challenges, so we just wanted to highlight them and give them our thanks,” Liscombe reasoned.

DEANS also tutors students in the community, raises funds for needy individuals, and assists in getting students enrolled in school.

“We had this young man [and] we helped [to] send him to do his CXCs at the May Pen Primary evening school and he was successful in them,” Barrett told the Observer.

How the group came about

DEANS is a group birthed from the Mothers on a Mission to Save (MOMS) initiative which, as the name suggests, are mothers working to improve the community.

“They are all kids that have their needs and we help them in whatever way we can, like get persons off to school. Some were on the street not going school; we got them registered in school we got persons sponsored and things like that,” Opal Chambers, founder of MOMS, noted.

Founded approximately four years ago, MOMS, like DEANS, works to improve the lives of the next generation.

“When I came around this community I saw some things, like kids weren’t in school and things like that, and I decided as a member of the community, let us try to do something and as a mother,” she explained.

“We look out for the kids next door, the person next door. Sometimes some of the simple things they need — some of them need encouragement, some of them their parent structure not good — so if we and others can look out and try to help even to encourage them, even to assist them in any way we can [its good],” she added.

The nine-member organisation is a committee member of the parish council’s benevolent society, which is responsible for poor relief and homelessness.

Looking to the future

When asked about the future of the groups, both presidents said they would want their groups to become a part of a global movement.

“We don’t really want people to see this as any other regular outreach group, but we want them to see it as a group of mentorship, as a group that is young persons. You know usually they say that we’re a generation of vipers, but we want them to see that we actually have young people now who actually care and who will actually stand in the gap for other young people that are in need of love or any other assistance that we can give,” Barrett stated.

The vice-president noted that they are looking to get partners to aid in the transformation of the lives of Clarendon’s youth.

Noting that they “fail to fail” as outlined in the groups motto, she said there’s a push to help young people fulfil their potential and achieve their utmost best.

One thought on “GO VANESSA”