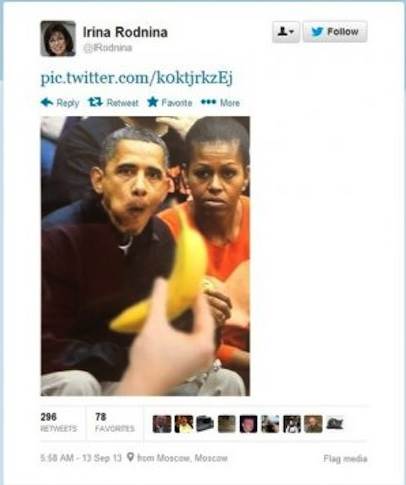 Rodnina posted the picture, which depicts President Obama chewing while a photoshopped hand waves a banana in his face, in September, 2013.

She insists that the image was sent to her from friends in America and is not racist:

Read more from The Guardian:

Racism is rife in Russia, and black football players often face racial abuse involving bananas. In 2011, the Brazilian Roberto Carlos, playing for Russian team Anzhi Makhachkala, left the pitch in anger after a banana was thrown at him from the stands. In a separate incident, the club Zenit St Petersburg was fined the equivalent of about £6,300 when a fan offered Carlos a banana before a match.

Rodnina, who lived in the US for many years, deleted the photograph but has not apologised and remains unfazed by accusations of racism. Instead, she suggested that the wave of criticism she prompted from liberal journalists and other Russians was a conspiracy.

The incident was widely discussed in the Russian press, with many commentators coming to the defence of the MP and figure skater.

“What Irina Konstantinovna put on Twitter is her business; it is her own personal space,” wrote the pro-Kremlin television presenter Vladimir Soloviev in a Moscow freesheet on Monday. “This is not a big scandal.”

He claimed that the reaction was oversensitive and that the photograph was not racist.

“I advise everyone who attacked her that the next time they go out for a coffee, they should not call it a black coffee but an African-American coffee.”

President Obama has been subjected to unprecedented racism during his two terms. More recently, he has openly criticized Russia’s ban on allowing gay athletes to participate in the Sochi Olympics.

As reported by the Associated Foreign Press, Obama picked several openly gay former athletes in the US delegation to the opening of the games and pointedly did not dispatch a cabinet-level official or a member of his family to Sochi.

“There is no doubt we wanted to make it very clear that we do not abide by discrimination in anything, including discrimination on the basis of sexual orientation,” Obama said in the excerpts of his interview with US Olympic host broadcaster NBC.

“One of the wonderful things about the Olympics is that you are judged by your merit, how good you are regardless of where you come from, what you look like, who you love and that I think is consistent with the spirit of the Olympics.”

0 thoughts on “HAVE MERCY!”