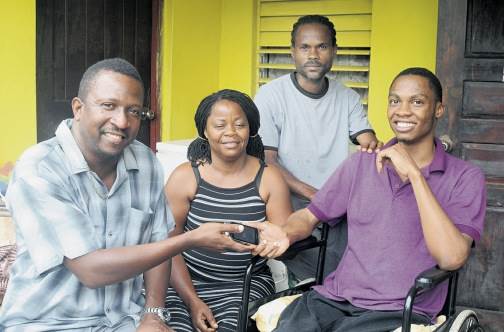 HE has one bullet lodged in his right side. Another has left him crippled, with a steel plate inserted in his back for support.

But despite this, 22-year-old Ian Smith Jnr declared that he will not let a bullet stop him from achieving his life’s dreams.

Smith was shot in the back and side while playing a game of cards with relatives in a lane in Nannyville Gardens, South East St Andrew on Valentine’s Day, (February 14) last year. He was one of eight people shot and injured when five gunmen fired wildly at residents trying to entertain themselves.

But what could easily be a deterrent for many, has proven to be a stimulus for the 2009 Kingston College graduate, even from the moment he realised that he was shot and falling in and out of consciousness.

“I remember I was on the ground conscious and I asked myself, what is this happening? Even while I was on the ground I made a joke with myself saying that it was Valentine’s Day and persons were getting candy and roses and here I was getting shot,” Smith told the Jamaica Observer in an interview at his home on Friday.

“I laughed, and then I blacked out. After that I was in and out of consciousness. But at the time I didn’t really fear much. My only concern was that I was about to die and I hadn’t really done anything with my life. Nothing! And that was the point where I actually gave myself a fighting chance,” a determined Smith said.

“When I had answered the question as to what I had done with my life, I turned around and said I know everybody is destined to die, but I wasn’t going to die … not like this. So I think that that was the thing that kept me through.”

Smith, who spent five weeks across wards at University Hospital of the West Indies and three months and two weeks in the Mona Rehab Centre, both in St Andrew, is wheelchair-bound and said that his journey so far has not been easy.

Police have since arrested five young men said to be involved in the shooting and the matter will head to court soon.

However, the family has endured uneasiness, following subtle threats aimed at Smith Jnr, some of which led him to smash his cellular phone, frustrated that he was getting calls from a certain prison up to 2:00 o’clock in the morning.

“I looked at the shooting and blamed myself,” he stated. “I said I knew that there was war going on in the community and I was still out there sitting down and playing card game. I have been angry, but the funny thing is that I have been angry with myself. When I first went to the rehab I spent the first three weeks not talking to anyone. No one at all.

I was just very angry. And there were two guys there who were happy all the time and I hated them. I hated them because I could not understand why they were so happy. But when I realised I couldn’t change them I just joined them. And so, I spent a lot of time with the psychologist. But what has happened now is that I have shifted my focus,” he disclosed.

Before the incident, Smith said that he sketched out what he wanted to achieve with his life. Top of the list was earning his degree in Business Administration. Now he has been forced to redesign his goal, one that still includes a degree but instead of business, he wants to major in psychology — an inspiration from the many visits he had to pay his psychologist while at the rehabilitation centre.

“Trust me, I sat down and sketched out for myself things that I wanted, but because of this I had to go back to the sketch and honestly tell myself that this is it for me. But no, these bullets don’t stop me. I will always go out and try to establish myself as a man should. For me, a man is not a man unless he can accomplish himself in certain ways. That is what I was taught as a little child growing up and that is always going to be with me. And staying at home in bed will never help me in that department,” Smith told the Sunday Observer.

The youngster said that his circumstances had caused him to also shift his spiritual focus, as he no longer lives his life without a purpose but with a full knowledge that there is more to life than what he once believed. Now, he no longer puts material achievements first, but instead lives by what has become his daily motivation … ‘seek ye first the kingdom of God and His righteousness and all things shall be added onto you’. (Matthew 6:33).

Smith is content to go to church as often as he can, and spends time with three friends whom he has come to accept as his best friends as they have been by his side since the incident and have been a source of support.

But while Smith no longer has the use of his lower body, he is able to pick himself up, bathe himself, turn himself over, go in and out of vehicles and reposition himself if his wheelchair tumbles over — tasks that he spent months learning to conquer.

Now, it’s the simple everyday things that pose a challenge to the once active youth.

“Sometimes, though, I feel like this is worse than death,” he said. “To me, when you die you just move on and that’s it. But for me now, you want to go and turn on the TV and the remote not working, to change the DVD and you can’t even do that. You know how hard that is? It’s worse when no one else is there with you, because I was the type of person my mother would wish she could tie my feet, knowing that she could actually keep me in one place for an hour. That’s the type of person I was,” he said.

“When I told myself that I am going to do this or I made a schedule for the week, trust me, I probably get it done in three days and have two days to do whatever else. I am not the type to just sit around and depend on others, so this, for me, is one of the greatest curses right now.”

But despite the mental roller-coaster that he often goes through, Smith, the son of Jamaican boxer Ian ‘Hagler’ Smith, said he will not sit still, not while his brain is working.

“This is still intact,” he said, tapping his head. “Everybody I came in contact with picked up on that quickly. So once I have my brain I am not going to give up. I have always planned to pursue my degree. It’s just that for now I need to pick up myself in certain ways first, put back the pieces of my life where they should go and then move on,” he insisted.

Smith’s mother, Nadine Williams, said that things have not been easy for either her son or her family since the incident.

Williams said that every Saturday morning Smith would play football with a group of KC Old Boys at the school’s Melbourne Park campus on Elletson Road, Central Kingston, and was a member of the track squad and Cadet Corps while he attended the famed school.

She, too, believes that one day her son will walk again and maintains that the family will continue to give him unlimited support.

Before the shooting that changed Smith’s life, he was working at Port of Call liquor store at the Norman Manley International Airport, a job he said he enjoyed.

He had also been selected to enter the Jamaica Constabulary Force and was due to begin training at the Police Academy in Twickenham Park, St Catherine a week after he was shot.

He admitted that sometimes his emotions are “all over the place”. However, he is firm in his mind that he must “get up and move on”.