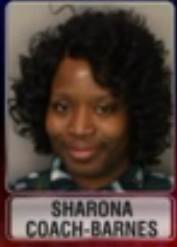 A woman is in jail after her husband came to serve her divorce papers and brought his new girlfriend along with him.
Police say Mrs. Barnes soon to be ex-husband took divorce papers to her with his girlfriend and she went off.
When the news interviewed his neighbors one said,

Another neighbor, Teisa Foster, felt differently.
“She should have got beat,” she said of Evans.
That’s exactly what happened.
Police say Coach-Barnes started punching Evans and even pepper-sprayed her.
Both took off running, but police say she wasn’t done yet. They say she got her mother and brother, found her husband and Evans, and pointed a gun at them as she drove by.