I LOVE IT…A METTER TO ERRICE 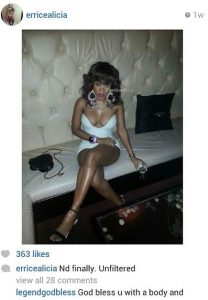 The girl by the name of Errice, I don’t know her and I think some people think she’s mad cool cuz she says she doesn’t care what people think. But she does, cuz nuff time people post comment on her pages saying how she acts isn’t appropriate etc and she makes a gazillion videos to cuss dem. But if you dress like a ho and act like a ho and even went so far as to post har pu**y pics on Instagram (someone showed me and people reported it and Instagram management warn her an tek it off) and she flaunting her body half naked, den why she feel dat people not gonna call har out on her behavior and question har lifestyle? When di people dem report it to Instagram one piece a cussing and ranting and writing up she gwaan wid, den afterwards mek video bout how people ‘badmind’ her and how she leave dem to God cuz she is blessed and dem cyaa stop her and she not worried. But would God approve of you putting your vagina in a bathtub of water so your ‘followers’ could see? She should stop curse and gwaan when she does stupid shit and den use God inna di next breath cus it makes her sound Bipolar and crazy. You say one thing (Miss I dont give a f**k..that’s what she calls herself) then do another by ranting and making videos cussing and acting all mad and upset dat people actually reprimanding her on her shit. I’m just saying dat sound like a Bipolar person.

And why act surprised when a hundred men email har saying dem want fi nyam/f**k/ram out har pu**y when she herself put it on a public forum so everybody can see it? And dress wid her nipples and body showing? If you act a certain way don’t be surprised if people treat you as such. Of course people gonna talk and regard you like a escort cuz if u don’t work, spend more time pon instagram than anything else, say you’re a designer yet no one ever sees your shit in stores, you don’t promote your merchandise in the media and you don’t advertise, of course people gonna get a clue. Jamaica small and people know people. Why show ur body more dan clothes! We get it, you have a beautiful body fine. But if you need to advertise it should be your business and your apparel, not your breasts or vagina on Instagram!. No man is gonna wife someone who can put dem vagina on Instagram, and who wears clothes without underwear and it’s obvious. Might as well you walk naked and put ESCORT SERVICE on your page. I just think such a beautiful girl selling herself then turning around and cursing people out while calling God name and saying that she’s God blessed and highly favored is kinda cliche when you doing everything ungodly. Dem muss stop use God name, cuz is only when people comment and call dem out on what dem doing den all of a sudden GOD find dem mouth and your’re a “hater” and “badmind” and all these things. You put urself and ur body out dere, so tek di good comments from di ‘fans’ wid di bad ones and shut up. People wouldn’t be calling your shit out if you weren’t doing it.

As mi granny woulda seh, if it nuh go suh a nearly so. Nobody wouldn’t be putting u up on Pinkwall if you never involve. Stop dressing and acting like a drunken ho and you won’t have people treat you like one.

Just my two cents met cuz she is a nice girl but I guess di wrong set a people she a falla cuz she make herself look cheap, like any man can buy her and shit. Social Media is not anyone’s friend. It only portrays a persona and people pick up on that and follow it.
Oh and Met,

66 thoughts on “I LOVE IT…A METTER TO ERRICE”